Trudeau approval at a low 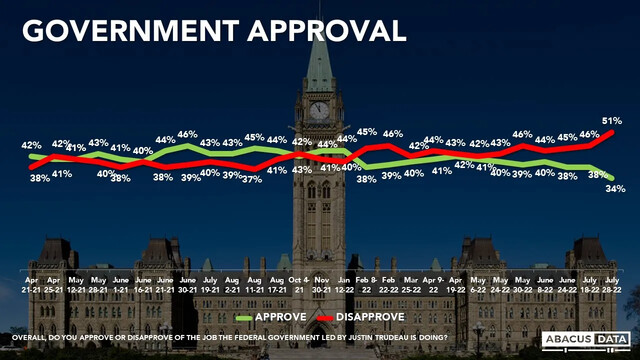 About 34 per cent of Canadians approve of the Trudeau government's performance, with a 51 per cent disapproval rate, a national poll from Abacus Data found.

This is the highest number recorded since Trudeau was elected in 2015, and since the SNC-Lavalin controversy in 2019.

In addition, Justin Trudeau's approval rating is the lowest number ever recorded, with a 31 per cent positive impression of the prime minister.

Unsurprisingly, 65 per cent of Conservative Canadians have a very negative view of the prime minister, which is nearly double the national average of 34 per cent.

The poll findings also show that among former Liberal voters in 2021, only 39 per cent of Canadians held negative views of Pierre Poilievre.

The poll also shows that if an election were called now, the Conservatives would win 35 per cent compared to 30 per cent for Liberals, and 19 for the NDP.

Since 2015, this is the first time the Conservatives have held a 35 per cent vote share where they've led the Liberals consistently for several months.

But one significant finding from the poll shows the Conservative Party holding 92 per cent while gaining a little from the Liberals, NDP and some PPC voters, when comparing how Canadians who voted in the 2021 federal election and how they would vote now. 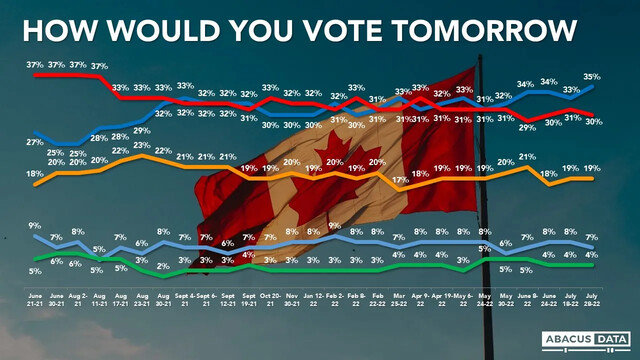