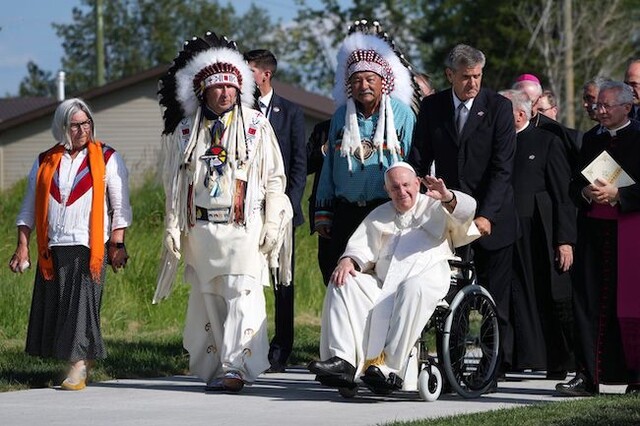 Canada's bishops are working with the Vatican in the hope of issuing a new statement from the Catholic Church on the Doctrine of Discovery, the organizers of the papal visit said Wednesday.

Many Indigenous leaders and residential school survivors had hoped Pope Francis would renounce the policy, which stems from a series of edicts, known as papal bulls, dating back to the 15th century. Countries, including Canada, have used the doctrine to justify colonizing lands considered to be uninhabited, but were in fact home to Indigenous Peoples.

The pontiff did not directly mention the Doctrine of Discovery when he delivered his apology to residential school survivors in Maskwacis, Alta., on Monday, which has prompted criticism it failed to fully recognize the role played by the Catholic Church in the residential school system.

Laryssa Waler, a spokeswoman for the papal visit, said Wednesday the Vatican has previously said the papal bulls linked to the doctrine have "no legal or moral authority" within the church.

"However, we understand the desire to name these texts, acknowledge their impact and renounce the concepts associated with them," she wrote in an email.

"Galvanized by the calls of our Indigenous partners, and by the Holy Father’s remarks, Canada's bishops are working with the Vatican and those who have studied this issue, with the goal of issuing a new statement from the church," she added. "Canada’s bishops continue to reject and resist the ideas associated with the Doctrine of Discovery in the strongest possible way."

She also referred to parts of the Pope's apology that she said "directly condemned" policies linked to the Doctrine of Discovery. She said that included when he said "many members of the church and of religious communities co-operated, not least through their indifference, in projects of cultural destruction and forced assimilation promoted by the governments of that time, which culminated in the system of residential schools.”

Miller stressed how the Pope's words, delivered before a crowd of survivors and others gathered near Edmonton, are deeply important to those now absorbing them.

"This is still an emotional moment," he said in an interview with The Canadian Press.

The minister said Indigenous Peoples will decide for themselves what they think.

Criticisms of the apology include that Francis did not mention sexual abuse in his remarks, and he mentioned the "evil" committed by Christians, but not the Catholic Church as an institution.

The Truth and Reconciliation Commission (TRC) clearly called for a papal apology to be similar to the 2010 apology the Vatican gave to victims in Ireland, Miller said.

The minister said that apology — delivered by Pope Benedict XVI through a letter — directly referred to the sexual abuses suffered by Irish children and the role played by the Catholic Church.

"That is a clear distinction in the two," said Miller. "The discrepancies speak for themselves."

Manitoba Keewatinowi Okimakanak (MKO), which represents northern First Nations, said in a statement it was happy to see survivors receive an apology, but noted the omission of apologizing for sexual abuses.

"Saying sorry and acknowledging the harms that have been caused is just one step of many that need to happen. There is so much more work to be done."

"It was a bit surprising the Doctrine of Discovery was also not mentioned, but maybe it will be down the road," MKO said in its statement.

Among the apology's harshest critics was Murray Sinclair, who chaired the TRC.

Sinclair has said the Pope's words left a "deep hole" in recognizing the full role the Catholic Church played in operating residential schools by highlighting the actions of Christians, not the church as an institution.

Miller, who travelled to Alberta for the papal visit, said the government will be seeking more detail on what Pope Francis meant when, in his apology, he said a "serious investigation" would be needed into what happened at residential schools.

The TRC, in writing its final report, collected testimony from more than 6,000 witnesses over six years.