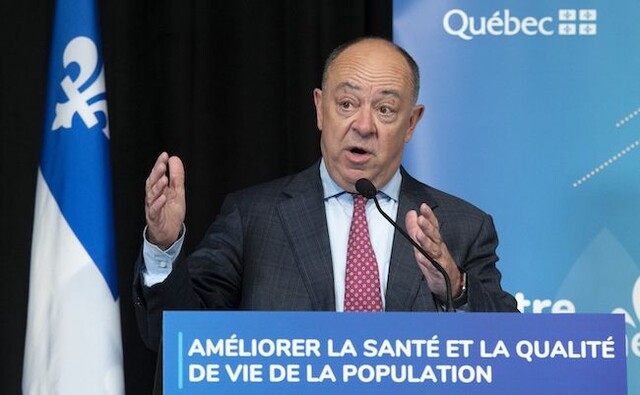 Quebec has joined Ontario in entering a seventh wave of COVID-19, Quebec public health director Dr. Luc Boileau said Thursday, adding that there are signs the wave will peak this month.

The highly contagious Omicron subvariants BA.4. and BA.5 are well established in Quebec and behind the rise in cases and hospitalizations, Boileau told a news conference.

“We expect the evolution to curve down during the month of July, but there are uncertainties over that," he added. "The curve is slower than a week ago so that's a small sign that we might get to the other side of it in the near future."

On Wednesday, the Ontario COVID-19 Science Advisory Table said the province was in a seventh wave, adding that wastewater testing results showed rising concentrations of COVID-19 and that the province's test-positivity and hospitalizations rates were also rising. Officials in that province said they expected the wave to peak sometime in the summer.

Despite the uptick in COVID-19 indicators, Quebec officials said they didn't plan to reimpose new public health orders, such as mask mandates on public transit. Instead, officials urged those who are infected with COVID-19 to follow isolation guidelines and for those who haven't received a booster to make an appointment for one.

“I think the entire world is fed up with COVID, but I think we said all along that we need to live with this COVID,” Quebec Health Minister Christian Dubé said Thursday, adding that the situation is considered under control.

Boileau said one of the factors driving transmission is that infected people aren't respecting the 10-day isolation rules from the moment symptoms appear. Infected people should spend the first five days at home, then wear a mask outside for the following five days.

“Basically, this is what explains the current wave: it’s the fact that those who have (COVID-19) are giving it to others," Boileau said. "Visibly, there are a lot of people not respecting (the rules) and it would be a good thing if they did."

On Thursday, Quebec reported 1,534 people hospitalized with COVID-19, a rise of 37 from the day before. They said 43 people were in intensive care, a rise of three. They reported another 16 deaths linked to the disease.

Officials also recommended people get a COVID-19 booster, adding that the Health Department would publish a chart later on Thursday to help people determine when it is the best time to do so. Dubé said 88 per cent of Quebecers aged 60 and over and of those deemed high-risk have received at least three doses of COVID-19 vaccine.

“I want people to enjoy their summer but to have this understanding the virus is still present and we must remain careful," he said.