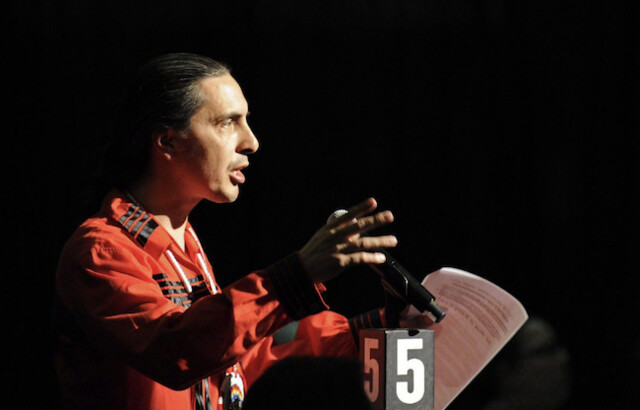 The Assembly of Manitoba Chiefs says an independent investigation has found its leader engaged in workplace sexual harassment.

A meeting is to be held soon to officially remove Arlen Dumas from the role of grand chief, the assembly said in a news release Thursday.

A staff member lodged a workplace misconduct complaint against Dumas in March. Dumas was suspended and a third-party legal firm was tasked with the investigation.

A final report was reviewed by the executive council Wednesday. The assembly said the contents are confidential out of respect for the sensitive nature of the investigation.

A special meeting is to be held to remove Dumas from the role through a vote of non-confidence under the assembly’s constitution. Until then, Dumas remains suspended without pay, the news release said.

Winnipeg police previously said an incident number for a complaint was generated but could not confirm the parties involved.

Dumas became Grand Chief in 2017 and was re-elected in 2021. Before that, he was the chief of Mathias Colomb Cree Nation for more than a decade.

Chief Cornell McLean of Lake Manitoba First Nation was tapped to head the assembly on an interim basis in April. Eric Redhead, chief of the Shamattawa First Nation, filled the role when Dumas was initially suspended but he stepped down soon after, citing time constraints and commitments.

The assembly said it is committed to reflecting on and reviewing its workplace policies and practices to ensure it fosters a culture of support and respect.

The Assembly of Manitoba Chiefs represents 62 First Nations in the province, accounting for more than 151,000 people.