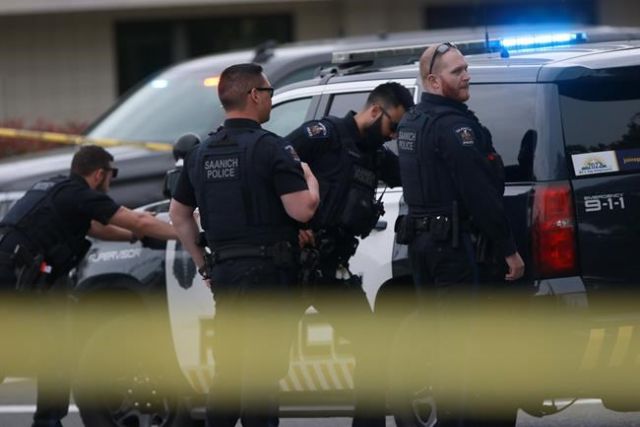 Photo: The Canadian Press
Saanich Police joined by Victoria Police and RCMP respond to gunfire involving multiple people and injuries at a bank in Saanich, B.C., on Tuesday, June 28, 2022. The chief of police in Saanich says it is truly amazing that no members of the public were hurt during a gunfight at a bank in which two robbery suspects died. THE CANADIAN PRESS/Chad Hipolito

Multiple explosive devices were found in a vehicle related to the two suspects who were gunned down outside a bank in Saanich, B.C.

Saanich Chief Const. Dean Duthie said Wednesday an RCMP explosive disposal unit was able to transfer the devices from the vehicle to a local landfill and destroy them.

Police had evacuated the area shortly after the shooting on Tuesday as the RCMP's explosives disposal unit was called in.

Six officers were shot and two suspects were killed in the shootout with police on Tuesday.

Duthie said three of the officers remain in hospital, including one who is in intensive care, while another officer will require more surgeries.

He said he spoke with one of the officers in hospital and said the police department will be there to support him.

"We're here for his family … just to let him know that the policing community is behind him 100 per cent."

The chief said police are still investigating the possibility of a third suspect, although they don't believe there's a risk to the public.

He said police were acting on vague information.

"Our goal was to keep the public safe," he said of police ordering residents near the bank to stay inside on Tuesday.

Police said in a statement that they aren't able to confirm identities, background or motive of the suspects.

Work is underway to try to confirm the suspects' names, police said.

Duthie has looked at much of the video footage of the incident and said it's a miracle that no one else died.

"It's astonishing that there was no other citizen or member of the public injured," he said, crediting the quick actions of officers who responded.

"Both patrol officers and Greater Victoria emergency response officers (put) themselves in harm's way to bring it to a successful and safe conclusion as quickly as possible."

A woman trapped inside the bank during the robbery told CFAX radio she was in a meeting with the manager when she heard a loud explosion and then silence.

Shelli Fryer, 59, of Langford said she looked from the doorway and a few feet from her was “a man in full assault gear, holding an assault rifle.”

Fryer said the masked man was wearing all black, had an armoured vest over his jacket and was holding a black rifle that was shorter and stockier than what she was used to seeing in the media.

"The energy from them was completely calm," she said.

She heard one gunman quietly say to the manager, "vault,” and the manager handed him the keys and they both walked out of the office, she said.

Fryer said the other suspect was pacing the floor, just walking back and forth past the office, “like he was going for a walk in the park, just pacing as if he was waiting for something.”

The robbers put all 22 people who were in the bank against a wall in a back hallway and they waited for what felt like an eternity, she said. “We heard nothing at all of what was transpiring outside, we couldn’t hear sirens.”

She heard in a loud voice, “Police!" and then a hail of gunfire, and everybody ran to hide.

Fryer said every one of the police officers involved in the “absolutely insane incident” handled themselves professionally, and then later treated those who were in the bank with kindness and concern.