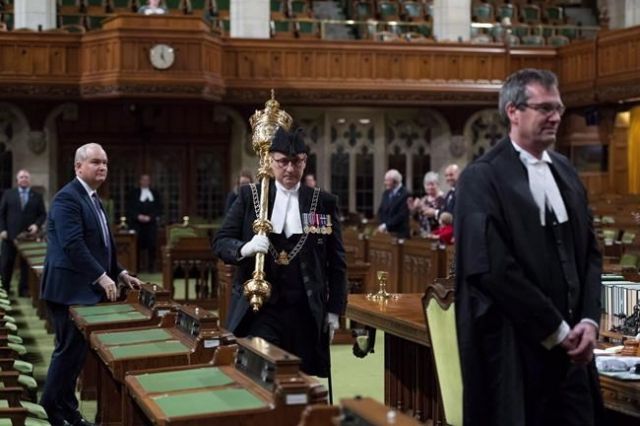 Photo: The Canadian Press
Patrick McDonnell, who was then acting sergeant-at-arms, carries the mace out of the House of Commons Chamber after the House rises, on Parliament Hill in Ottawa on Thursday, Dec. 13, 2018. Parliament's sergeant-at-arms says he was "flabbergasted" at how near-daily harassment of MPs and staffers was allowed to continue under the jurisdiction of Ottawa police during the "freedom convoy." THE CANADIAN PRESS/Justin Tang

The sergeant-at-arms for the House of Commons says he was "flabbergasted" at how the Ottawa police allowed the harassment of members of Parliament and staffers to go on during the protests against COVID-19 restrictions in the capital earlier this year.

Patrick McDonell, who works closely with the head of the Parliamentary Protective Service, told a committee today that MPs and their employees faced harassment nearly every day on Wellington Street in downtown Ottawa, which is under the jurisdiction of local police.

The committee is studying whether to expand the jurisdiction for the operational security of the precinct around Parliament Hill to include parts of Wellington Street, where vehicles parked for three weeks during the "Freedom Convoy," and Sparks Street, which includes a pedestrian mall.

McDonell says there was a police car "well within viewing distance" of the events he was describing and that the incidents were reported to Ottawa police "every day."

He says one person would block the cars of some employees as they arrived at a nearby parking lot and if the employee was a woman, the individual would "bang their car" before moving aside.

McDonell also says one woman employee was accosted by a man who tried to throw what appeared to be a bag of human feces at her before another employee arrived and pushed the man to the ground.