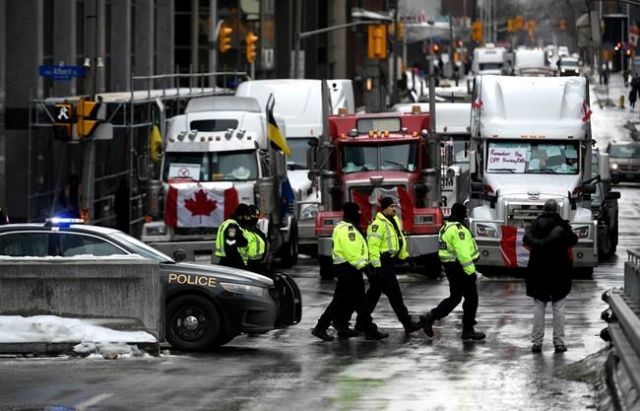 Photo: The Canadian Press
Police officers patrol on foot along Albert Street as a protest against COVID-19 restrictions that has been marked by gridlock and the sound of truck horns reaches its 14th day, in Ottawa, Thursday, Feb. 10, 2022.

The Ontario police watchdog says two Vancouver police officers did not commit a criminal offence by shooting less-lethal rounds at two protesters during the “Freedom Convoy”' demonstration in February.

The director of the Special Investigations Unit, Joseph Martino, says in a statement he found no reasonable grounds that the two officers acted unlawfully in discharging their less-lethal weapons at the protesters.

He notes no serious injuries were reported.

Martino says a Vancouver police officer shot rubber bullets and a pepper-spray projectile at a protester who was shining a bright light on the front of the police line on Bank Street in downtown Ottawa.

He says another Vancouver police officer shot either rubber bullets or bean bags to deter protesters from moving toward officers.

The officer fired his weapon, striking one protester in the leg, and fired again at another protester.

Martino says he is satisfied that the officers engaged in a "reasonable and legitimate exercise of police powers" to maintain public order and safety.

Vancouver police officers were in Ottawa to help control the crowds gathered for the convoy protest that gridlocked downtown streets for more than three weeks.