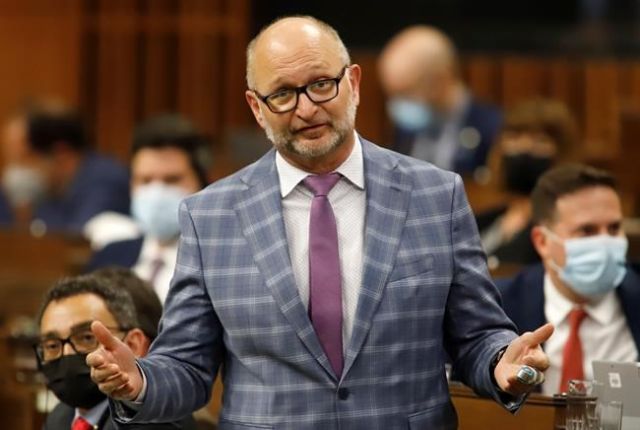 Photo: The Canadian Press
Justice Minister and Attorney General David Lametti rises during Question Period in the House of Commons on Parliament Hill in Ottawa on Tuesday, June 7, 2022. Federal MPs are expected to vote this afternoon on whether to adopt the Liberals' mandatory minimums bill and send it to the Senate. Bill C-5 would amend the Criminal Code to remove mandatory minimum sentences for all drug convictions and for some firearms and tobacco-related offences.THE CANADIAN PRESS/ Patrick Doyle

Bill C-5, which passed third reading in the House of Commons with a vote of 206 to 117, would amend the Criminal Code to remove mandatory minimum sentences for all drug convictions and for some firearms and tobacco-related offences.

Prosecutors would also be required to consider referring defendants to treatment programs or other support services instead of charging them for simple drug possession offences.

Justice Minister David Lametti has argued the changes, which reverse "tough on crime" measures passed under former Conservative prime minister Stephen Harper, would target the overrepresentation of Black and Indigenous people in the criminal justice system.

“The recent corrections and policing reports are a disappointing reminder that systemic discrimination and racism are a reality for too many in Canada’s criminal justice system,” Lametti said in a statement.

Thanks to an NDP amendment to the bill, existing criminal records associated with simple possession charges will now disappear within two years, or, for new convictions, two years after the end of the sentence.

NDP Justice Critic Randall Garrison said in a statement that the government’s acceptance of the provision is an acknowledgment of how “seriously flawed” their existing system for pardons is.

Garrison said the changes in the bill are long overdue. “We know that on this government’s watch, the percentage of Indigenous women in federal prisons has reached shocking and unacceptable levels.”

Canadian courts have already struck down some mandatory minimum sentences, calling them unconstitutional.

Still, Conservatives are holding fast on their line that Bill C-5 is “soft on crime” and “puts communities and victims at risk.”

Along with Independent MP Kevin Vuong, the Conservatives voted against the bill at third reading, while the other parties joined with the Liberals to pass it.

Conservative justice critic Rob Moore asserted in a statement that the mandatory minimums should stay in place, especially for weapons offences.

If the bill passes the Senate, it will be Liberals' first major move on the file after promising to review mandatory minimums in 2015.

Their previous version of the same legislation, Bill C-22, was introduced in February 2021 but died on the order paper when last fall’s federal election was called.