MPs rush over 150 amendments to streaming bill; Senate says it won't be pressured 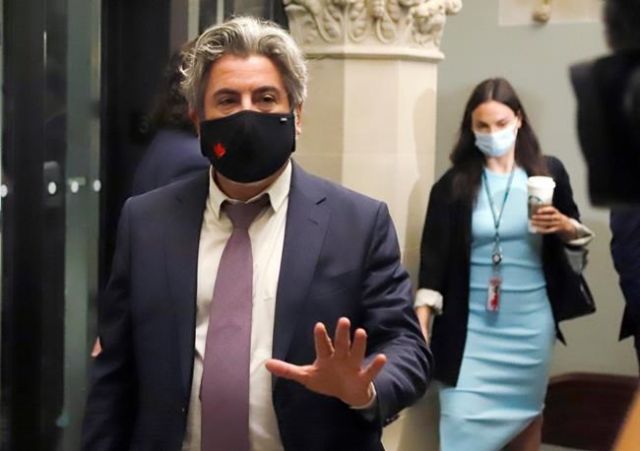 Photo: The Canadian Press
Minister of Canadian Heritage Pablo Rodriguez arrives at a cabinet meeting on Parliament Hill in Ottawa on Tuesday, June 14, 2022. MPs have rushed through dozens of amendments to an online streaming bill to meet a deadline imposed by the government prompting accusations of secrecy and legislative bungling.THE CANADIAN PRESS/ Patrick Doyle

MPs have been forced to rush through over 150 amendments to the online streaming bill to meet a deadline imposed by the government, prompting accusations of secrecy and legislative bungling.

But senators have signalled they will not be pressured to speed up consideration of the bill, claiming they have thwarted government ploys to push it through the upper house.

The online streaming bill, which the government rushed through the Commons heritage committee on Tuesday, is now subject to a pre-study by the Senate committee on transport and communications.

The Senate committee's chair, Conservative Sen. Leo Housakos, accused the government of planning to "ram this legislation through without proper parliamentary scrutiny."

He said the government had tried to force the Senate to "undertake an unnecessary pre-study hoping to then claim that further study wouldn't be necessary."

"Thanks to the Official Opposition in the Senate and a few other Senators from other groups and caucuses, those plans have been stymied," Housakos said. "It’s been made quite clear to the Trudeau government that there will be a diligent and thorough study of this flawed legislation; one that will be done transparently and will include witnesses whose voices and concerns were silenced in the other place.”

Heritage Minister Pablo Rodriguez said he had been "meeting with and listening to senators for months, and they want a full study of the bill."

"I totally respect their role to do this important work with the time they need to get it done," Rodriguez said.

There were heated exchanges Tuesday between Conservative and Liberal MPs at the heritage committee, which sat until midnight as they voted on over 150 amendments to the bill.

The bill, known as C-11 in Parliament, updates the Broadcasting Act to include streaming platforms such as Netflix and require them to follow Canadian content rules. The bill’s scope has been hotly debated, with platforms including YouTube, TikTok and Spotify raising concerns about how the law will impact them and their users.

This meant that their contents were not explained to members of the public watching the committee.

Experts watching the proceedings accused the government not only of forcing legislation through Parliament but of a lack of transparency.

"Canadians watching the hearing would be rightly appalled, wondering how a democratic country that sees itself as a model for the world would descend to the level of racing through over a hundred amendments without discussions, debate or even public disclosure of the content of the amendments," Geist said.

MPs on the committee, who sat until midnight voting on amendments, say they were only made aware of the text of all of them on Tuesday morning.

Green MP Mike Morrice, who tabled an amendment to clarify that user-generated content, such as amateur videos posted on YouTube, would not be affected by the bill, said he was disappointed that the committee ran out of time to properly discuss it and other clauses. His amendment did not get government support.

"I'm disappointed there wasn't more time to debate clause by clause on a really important bill," he said.

Liberal MPs said the government's decision to table a motion to cut short debate of amendments followed repeated attempts by Tories on the committee to wreck the bill by filibustering in the committee, in an attempt to talk it out.

The marathon committee hearing on Tuesday became fraught and tense by the evening, with Tory MP Rachael Thomas claiming she was the victim of personal attacks.

John Nater, Conservative heritage critic and committee member, said "there is absolutely no justification for a bill of this magnitude to be rammed through so hastily and with such little study."

"As a direct result of the closure motion from the Liberal government, at 9 p.m. on Tuesday evening members of the Heritage Committee were compelled to instantly vote on over 100 amendments and dozens of clauses to Bill C-11," he said. "For over three hours these votes were held without debate or explanation."

But Laura Scaffidi, spokeswoman for Rodriguez, said there has been "a lot of study on the bill."

“The committee heard from more than 70 witnesses over more than 21 hours of study at committee," she said. "All parties, including the Greens, were successful in amending the bill. The government voted for at least one amendment from each opposition party, including the Conservatives. That’s a multi-partisan collaborative effort in spite of the Conservatives’ filibustering.”

The bill, now being considered in a Senate committee, will be studied in greater detail in the fall by senators.

Platforms that will be regulated under broadcasting laws said they wanted closer consideration in the Senate, as they were still unclear how precisely the bill will affect them.

Jeanette Patell, head of government affairs and public policy at YouTube Canada, said the platform hopes to work closely with the Senate on the bill.

She said the company is "disappointed" that in the Commons committee the "concerns of thousands of Canadian creators were not recognized through amendments that would have reflected the minister’s intention for Bill C-11’s scope."

Regan Smith, head of public policy and government affairs at Spotify, said the platform wants "the bill to be looked at carefully with our concerns in mind" in the Senate.

“There’s some language in the bill that we’d like clarity on, in particular on how Canadian content should be identified and recommended," she said. "We want to ensure that songs by artists we recognize as Canadian can be classified as Canadian."