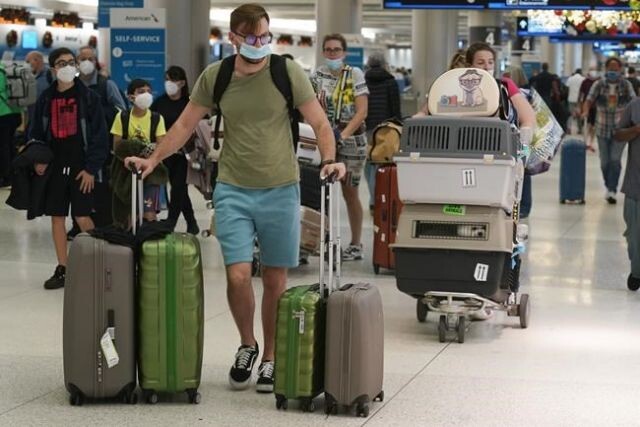 Sources confirm the Canadian government is putting an end to COVID-19 vaccine mandates for domestic and outbound international travellers and federally regulated workers.

A formal announcement is expected on Tuesday afternoon as the government faces mounting pressure from tourism and travel associations to do away with vaccine mandates to help ease the chaos that has erupted at Canada's airports and bring rules in line with provincial public health measures.

The new rules are expected to come into effect on June 20, though two government sources close to the decision, who were granted anonymity to speak about matters they were not authorized to discuss publicly, say the rules for foreign nationals coming to Canada will not change.

Travel industry groups have blamed federal public health measures for slowdowns at airport customs that have contributed to long waits for passengers and forced flight delays and cancellations.

The government announced last week it would suspend random testing at airports for vaccinated travellers, with plans to move testing offsite by next month. But after that announcement, the Canadian Travel and Tourism Roundtable called on the government to end vaccine mandates for travellers and staff at Canada's airports.

The vaccine mandate will also be lifted for domestic travellers on passenger trains and buses, allowing unvaccinated Canadians to move more freely around the country.

The change will also affect federal workers who have been put on unpaid leave because of their vaccination status.

The government hasn't revealed how many employees have been put on leave, but reports 98.5 per cent of public servants are fully vaccinated with two doses of a COVID-19 vaccine.

The Public Service Alliance of Canada filed a policy grievance against the government earlier this year on behalf of those put on leave as well as public servants who work from home but still needed to vaccinated or risk losing their pay. Several other public sector unions have made similar challenges.

The government made no secret that it hoped the mandates would pressure Canadians to get their shots, saying the move was necessary to protect the public from severe illness and transmission of the virus.

After the Omicron variant overwhelmed the country, opposition members and some experts began to question the effectiveness of the mandate, since Omicron was still transmissible among people considered fully inoculated.

However, some public health experts have called on the government to add a third dose to the vaccine mandate to protect against severe illness.

She said policy decisions about vaccine mandates are made by cabinet, and she has been providing data to support their decisions.

"But that's not the only information that the relevant employers or ministers have to take into account," she said.

It would appear the federal government is ready to remove many COVID-related travel mandates.

According to CTV News, government sources stated it will announce Tuesday vaccine mandates for all domestic air and rail travel will be lifted.

Mandates on all outgoing international travel will also be lifted.

It's expected the mandates will be removed effective Wednesday.

Sources have said mandates could be reimposed if a new variant of the virus materializes.

The mandates have been in effect for the last eight months.

– with files from CTV News