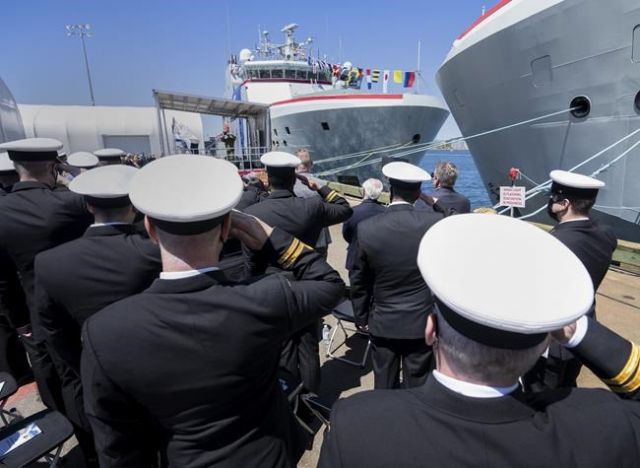 Photo: The Canadian Press
Members of the Royal Canadian Navy salute at a naming ceremony for HMCS Margaret Brooke and HMCS Max Bernays, Arctic and Offshore Patrol Ships (AOPS) at Halifax Shipyards in Halifax on Sunday.

Members of the Royal Canadian Navy and federal and provincial government dignitaries gathered on the Halifax waterfront today for the naming ceremony for two of Canada's new Arctic and Offshore Patrol Ships.

Margaret Brooke enrolled as a nursing sister dietician in 1942, and during her 20 years in the navy she rose to the rank of Lieutenant-Commander.

In October 1942 off the coast of Newfoundland, the ferry SS Caribou was sunk by a German submarine, and while fighting for her own survival, Brooke did everything possible to save the life of a colleague and friend.

Despite her heroic efforts, her friend succumbed to the frigid water.

In August 1942 Max Bernays was acting chief petty officer and was the coxswain aboard HMCS Assiniboine.

Despite a fire that engulfed the bridge and wheelhouse of the Assiniboine during a fierce battle with a German submarine, Bernays was able to ram the submarine and sink it.

The HMCS Margaret Brooke was delivered to the navy last summer, while the HMCS Max Bernays will be delivered this fall.