Emergency alerts when severe weather happens can be improved: Guilbeault 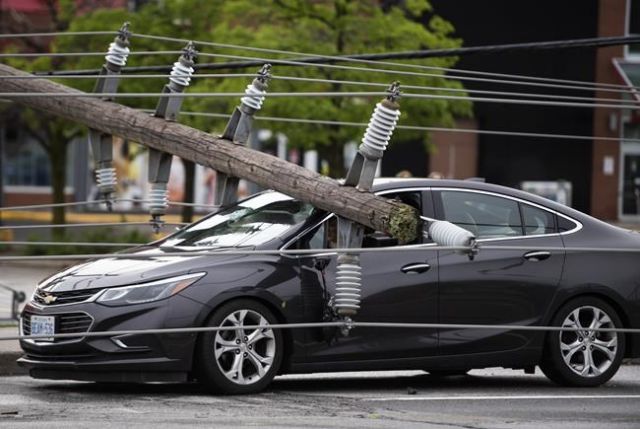 Photo: The Canadian Press
A motorist remains in their vehicle as they wait for crews to make sure they can leave safely, after power lines and utility poles came down onto their car during a major storm, on Merivale Road in Ottawa, on Saturday, May 21, 2022. Environment Minister Steven Guilbeault says emergency alerts that broadcast over the cell network to warn of severe weather should be improved to make sure they're getting to the right people at the right time.THE CANADIAN PRESS/Justin Tang

Environment Minister Steven Guilbeault says emergency weather alerts that are broadcast over the mobile network should be improved to make sure they're getting to the right people at the right time.

Guilbeault says the critical issue is to make sure the warnings are sent when people need to pay attention, but don't tune them out.

He says such conversations may form part of the discussion between governments on adapting to climate change as severe and extreme weather is a more frequent occurrence now in all parts of the country.

Environment Canada issued a broadcast alert on the cellphone network for a thunderstorm for the first time Saturday as the storm now known to have been a derecho raced across Ontario with wind speeds above 130 kilometres an hour.

But there have been some complaints about the warnings not being issued early enough or others not getting the message at all.

At least 10 people were killed, most from falling trees, as the storms moved from Sarnia, Ont., to Quebec City over the course of about six hours Saturday.

Others were trapped in their cars in Ottawa as power lines fell around them, and at Canada's Wonderland north of Toronto, people were trapped on a roller-coaster in the severe weather for almost half an hour after the power went out.