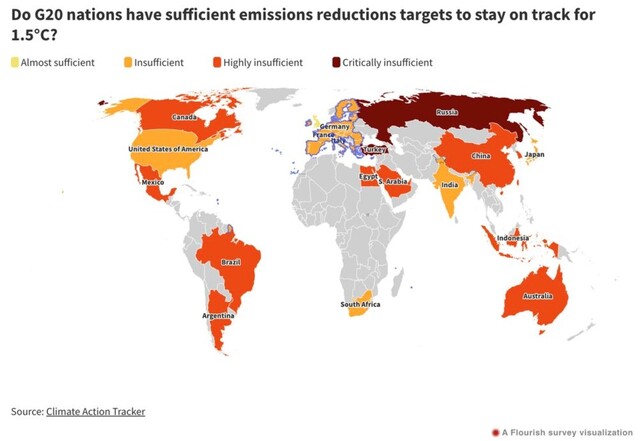 Canada’s national emissions reduction targets are “highly insufficient” for the country to do its part in keeping global warming below 1.5 Celsius — the threshold scientists say will lead to catastrophic damage to the world's climate — says a new report.

In March 2022, the federal government recommitted to reducing national emissions 40 per cent below 2005 levels by 2030. By 2050, Canada aims to produce net-zero emissions, meaning it reduces or absorbs as many emissions as it releases.

But the latest analysis — from the U.K.-based Energy and Climate Intelligence Unit, the climate change think tank, E3G, and the World Resources Institute — found Canada’s plans are falling short.

“For Canada, and for all the G20 countries, there’s still a huge gap between the level of ambition and what’s being achieved,” said Tom Evans, a co-author of the report and an international climate diplomacy analyst at E3G.

To meet its commitments under the 2015 Paris Agreement, Canada would need to up its 2030 emissions reduction target to a 54 per cent decline from 2005 levels, concluded the analysis.

The current 14 per cent gap between what’s planned by the Justin Trudeau government and what’s required for Canada to do its fair share adds up to 128 megatonnes of carbon dioxide.

In addition to Egypt and the United Arab Emirates, which are hosting upcoming UN climate conferences, the report analyzed all G20 countries, which together account for 75 per cent of all global greenhouse gas emissions.

Other G20 countries that haven’t even submitted updated climate action plans (known as a Nationally Determined Contribution) include India, Egypt and Turkey. Others, like Brazil, Mexico, Indonesia and Australia, have submitted updated NDCs but haven’t added enhanced targets.

Among the countries analyzed, the United Kingdom was closest to aligning its emissions with the 1.5 C target, while Turkey and Russia’s emissions reductions targets were gauged as “critically insufficient” to remain on track to 1.5 C.

In announcing its enhanced emissions reductions plan in March, the federal government laid out a road map with $9.1 billion in investments meant to help reduce emissions in things like buildings and transportation, all while creating jobs.

To pull off the emission cuts, Trudeau said Canada would cut oil and gas production by 42 per cent by 2030.

“Big oil lobbyists have had their time on the field. Now it’s over to workers and engineers who will build solutions for their sectors, for their communities and for their kids,” the prime minister said in a March visit to Vancouver.

Others have criticized the government’s plans as giving a backdoor for the oil and gas sector to keep producing. In April, Ottawa unveiled a $7.1-billion refundable tax credit program to help the country’s oil and gas industry pursue technology to scrub greenhouse gas emissions from its operations.

The tax breaks to the fossil fuel industry are expected to cost $2.6 billion in taxpayer dollars over the first five years, and other $1.5 billion annually after that until 2030.

At the time, Temitope Onifade, a researcher with the Canada Climate Law Initiative, described the program as “too risky,” while environmental groups said the “wildcard technology” was too expensive, and that that money would be better put to use on proven renewable energy technologies, like wind or solar.

“There’s a choice right now — do you go full throttle on renewable energy and efficiency or do you risk going into fossil fuels?” said Evans.

It’s more than an ideological choice, he added. The combined effects of the COVID-19 pandemic, tightened supply chains and the war in Europe have meant significant food shortages and increases in the cost of living for people around the globe.

Earlier this month, Germany, Denmark, the Netherlands and Belgium signed an agreement to increase offshore wind capacity 10-fold by 2050, a target that would provide enough energy for 230 million households, or 35 million more than currently exist on the continent.

“Trudeau is making a major strategic mistake by doubling down on oil, gas and carbon capture technology that extends the life of fossil fuels,” Evans said.

“Other developed economies like the EU, Germany and now Australia are seeing investment in renewable energy as a big win — helping tackle expensive gas bills, cutting Putin’s supply of oil and gas money, and creating tons of new jobs that can help pandemic recovery.”

To ensure national security and ease the cost of living crisis, Evans says investing in big oil and gas projects — such as the federal approval of the $12-billion Bay du Nord offshore oil project in April and a $10-billion loan guarantee for Trans Mountain pipeline in May — amount to “running in the opposite direction to science.”

“Canada could look like a laggard if it doesn't pull up its socks.” 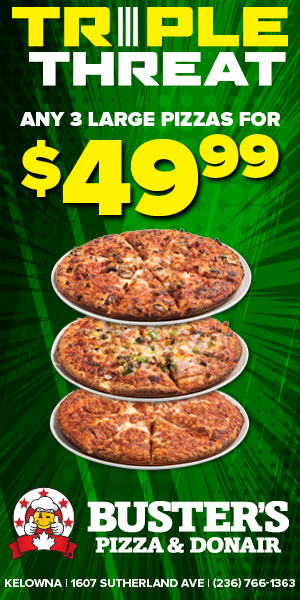