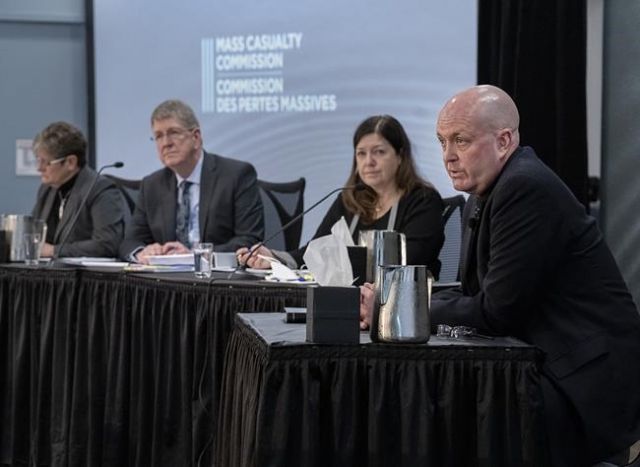 Photo: The Canadian Press
RCMP Cpl. Duane Ivany, a member of the force's emergency medical response team, fields questions as commissioners Leanne Fitch, Michael MacDonald, chair, and Kim Stanton, left to right, look on at the Mass Casualty Commission inquiry into the mass murders in rural Nova Scotia on April 18/19, 2020, in Dartmouth, N.S. on Thursday, May 5, 2022. THE CANADIAN PRESS/Andrew Vaughan

The public inquiry into Nova Scotia's mass shooting has already cost $25.6 million to investigate the April 18-19, 2020, rampage — and there are still about five months remaining in its mandate.

Costs are shared between the federal and provincial governments for the inquiry, which was established in October 2020 and started public proceedings on Feb. 22 of this year.

The inquiry is probing the causes and circumstances that led to the shooting deaths of 22 people over 13 hours by a gunman driving a replica police vehicle, and it is expected to recommend ways to help prevent and respond to similar incidents in the future.

According to the expenditures breakdown presented up to March 31 of this year, the inquiry spent almost $2.9 million in fiscal year 2020-21, and in the latest fiscal year it spent about $22.7 million.

About $9.5 million of the cost has been for the salaries and benefits for 68 employees, with chief commissioner Michael MacDonald receiving up to $2,000 daily and the two commissioners, Leanne Fitch and Kim Stanton, $1,800 daily.

Some of the commission’s budget funds the cost of lawyers representing family members of victims, with that portion of the expenses totalling about $2.5 million to date.