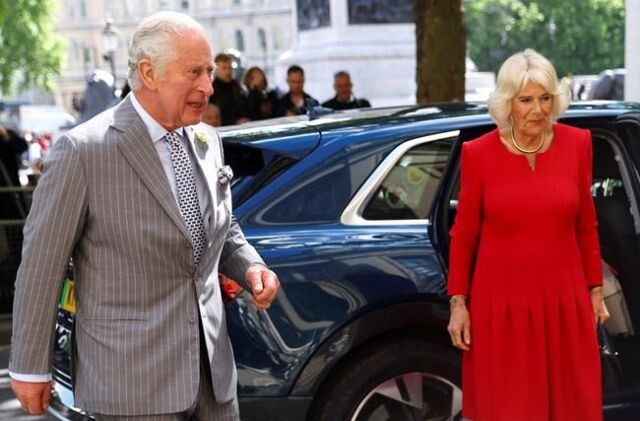 Photo: The Canadian Press
Prince Charles and Camilla, Duchess of Cornwall, arrive at Canada House in London, Thursday, May 12, 2022.

The Russian invasion of Ukraine has hastened the urgent need to transition to a green economy, Prince Charles said Wednesday during a whirlwind tour of Canada’s capital, where he also met with displaced Ukrainians and lit candles in an Orthodox church.

The prince and Camilla, Duchess of Cornwall, packed numerous Ottawa landmarks into the busy second day of their Platinum Jubilee tour, but the Ukraine crisis — the worst European military conflict since the Second World War — became a major focus of their visit.

Prince Charles spoke about the impact of the Russian invasion on the world economy at a sustainable-finance roundtable. The war has driven up gas prices across the globe, prompting many to call for quicker action on reducing the world’s dependence on fossil fuels.

The prince urged Canada to use its “incredible influence” at the G7 and in other international forums to work on solutions to the climate and biodiversity crisis.

He said he subscribes to an idea put forward by Indigenous Peoples, “that we must be thinking seven generations ahead, really, to have any chance of making sure we leave a better world behind us.”

The world is facing an emergency that governments alone cannot solve, said the prince, who has long been an environmental advocate.

“I’ve been trying to bring people from around the world together on sustainability for something dreadful like 40 years now,” he said.

“Now after endless procrastination, time is running out. So with trillions of dollars in assets, the private sector and private finance hold the ultimate key, I believe, to our success.”

Prince Charles called for “bold, innovative and creative public-private solutions at scale if we are ever, ever to see results.”

The prince and Camilla arrived in Canada on Tuesday, spending the day in Newfoundland and Labrador before flying to the national capital in the evening. Their itinerary in Ottawa included bilateral meetings with Trudeau and Gov. Gen. Mary Simon and a Platinum Jubilee reception at Rideau Hall.

Métis National Council President Cassidy Caron said she intended to use that occasion to make a request for an apology from the Queen for the legacy of residential schools.

Earlier on Wednesday, the couple lit candles and listened to a prayer service inside the Blessed Virgin Ukrainian Orthodox Cathedral as a gesture of support for the war-ravaged country.

“Your country is truly a friend of Ukraine, having extended a helping hand, not only militarily but also as fellow citizens of our planet. We will never, never forget that,” Father Ihor Kutash told the royals.

Outside the cathedral, the crowd chanted "Slava Ukraini,” which means glory to Ukraine. Among those gathered was Iryna Bloshenko, who arrived in Canada from Dnipro in the besieged country just four weeks ago.

"I am very happy, very excited to see the royals," she said, waving a Ukrainian flag. "We appreciate the royals’ support for Ukraine."

After the service, the royal couple met with a Ukrainian family who fled the Russian invasion.

Crowds grew throughout the day, and by early afternoon the couple was swarmed by a large group of well-wishers and royal watchers at the ByWard Market.

Prince Charles and Camilla made their way through the market to the BeaverTails stand and a maple syrup shack.

Owner Robert Charles Hupe said he found out last week he’d be getting a chance to introduce his wares to the royals. He planned to highlight his maple butter, although royal etiquette dictates he can’t offer to send them home with some unless they ask.

His mother named him after the prince, he said, and he’s been looking forward to meeting his namesake.

At Assumption Elementary School, Camilla sat down to read to a grade one and two class and spoke with older students in a French immersion class.

Many of the students' families are new Canadians, and Prince Charles spoke with several parents who've recently immigrated.

“He’s so nice, I’m telling you,” said Fatimah Akintoye, a single mother who moved to Ottawa from Nigeria to start a better life with her five children. "And he’s so patient with us, asking questions about us."

Kids lined up outside the school, singing O Canada as the couple left for their next event.

While touring the RCMP's Musical Ride stables, Camilla playfully tugged the ear of a horse named William, one of several that have connections to the Royal Family. The couple's affection for all things equine was on display as they met horses and riders alike. The RCMP and Queen Elizabeth have gifted horses to one another since 1969.

Prince Charles presented an RCMP long service medal to Commissioner Brenda Lucki, marking her 35 years with the force. The medals are presented to members "of irreproachable character."

The prince was also invested Wednesday as an extraordinary commander in the Order of Military Merit, which is marking its 50th anniversary this year.

The royals also visited the National War Memorial, where they observed a minute of silence before laying a wreath and a bouquet of flowers in front of the Tomb of the Unknown Soldier.

The crowd outside the memorial was modest, but Cecile Dumont wasn't taking any chances and got there at 7 a.m. Wednesday.

“I wanted to get the best spot. I’m a real royalist, their No. 1 fan,” she said. “It’s history in the making, the future king is here in Ottawa.”

Charles and Camilla are to fly to Yellowknife Thursday for the final day of their three-day tour. At the Jubilee gala, Simon wished the couple a safe trip and encouraged them to listen to the Indigenous leaders, elders and community members they meet in Canada's North, saying their stories are an integral part of the journey towards reconciliation.