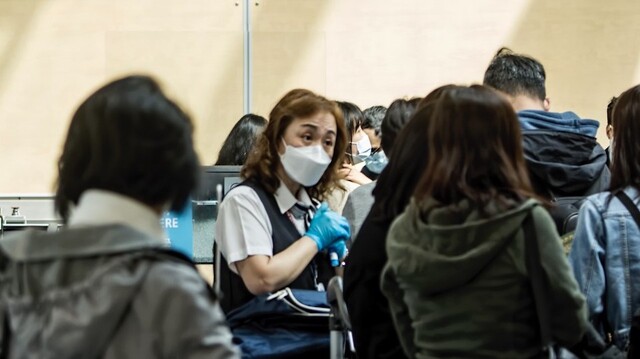 Photo: Chung Chow/BIV
A crowd of travellers drop off bags, and are steered to a line-up to go through security at Vancouver International Airport.

Weekends and early mornings have been some of the worst times to depart Vancouver International Airport (YVR) in recent weeks.

Long line-ups stem from a surge in demand for air travel, and that is prompting companies at the airport, and airlines, to hire staff.

Crushes of people have had to endure hours-long waits to pass through airport security – prompting airport officials to advise travellers to arrive at least two hours before domestic flight departures, and three hours before leaving on flights to the U.S. or other countries.

"Workers have not come back after the COVID-19 global pandemic, but travellers have," explained Allied Universal's vice-president of communications, Sherita Coffelt.

"This is not unique to Allied Universal, as airports across Canada with different contractors providing screeners have experienced delays."

Coffelt told BIV her company employs more than 800 security-screening workers at YVR, and that it plans to hire another 300 employees. More than 100 of those are in the pipeline to be hired, and are now conducting needed training to prepare for tests and CATSA certification, she said.

Unionized Allied Universal workers earn up to slightly more than $22 per hour – a wage that makes them underpaid, one screener told BIV.

That screener, who did not want to be named, said that sometimes workers are not able to take breaks, and that they are sometimes being required to manage security lines when there is not sufficient staff at all necessary points in the line.

Coffelt told BIV that she was not aware of this issue.

She said her company's recruitment efforts include providing referral bonuses to staff who successfully find new hires for the company. Those bonuses range between $350 and $3,250 depending on the market, the position being hired and the job candidate's qualifications.

There are not yet any signing bonuses, Coffelt added.

The authority that oversees airport operations has also not yet had any crimps in its own internal operations.

It is, however, hiring "across all departments and areas," it said in its statement.

When the pandemic descended, about 26,500 people worked for a range of companies at the airport, and more than 50 per cent of them were laid off. Those workers included staff at fast-food restaurants, gift shops and other businesses.

The surge in air travel is causing businesses to rehire those workers.

Airlines have ramped up hiring because they expect surging demand for air travel will increase as summer nears.

The industry metric that best tracks whether air travel is increasing is available seat miles (ASM). That indicator multiplies the number of passenger seats on planes by the distance that the planes fly.

Air Canada said in its April 26 earnings report that it plans to increase its ASM capacity by approximately 414 per cent in the quarter that ends June 30, compared with the same quarter one year ago.

That would put the airline's ASM at about 73 per cent of what was offered pre-pandemic in its second quarter of 2019.

The airline is calling back pilots and flght attendants, and hiring new staff.

Recent job postings for Air Canada flight attendants have pinned the salary at $28.28 per hour.

He added that the company had recalled more than 10,000 employees.

"We continue to recruit in some areas, such as for the so-called below-the-wing positions, which are the ground-handling functions," he said.

"In terms of pilots and flight crews, we kept the vast majority of our pilots working through the pandemic and we have recalled all available flight attendants."