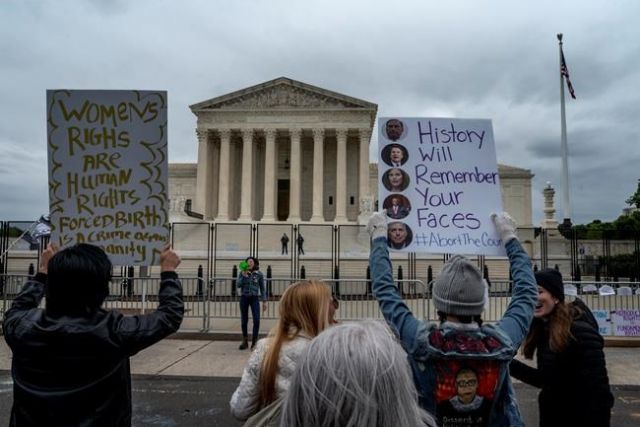 Photo: The Canadian Press
Abortion-rights protester Estephanie Ward uses a bullhorn to chant during a demonstration outside of the U.S. Supreme Court, Sunday, May 8, 2022, in Washington. The Liberal government says it is giving $3.5 million for two projects to help improve access to abortion services in Canada as the possible return of Roe v. Wade in the United States has brought renewed attention to the issue on both sides of the border.  (AP Photo/Gemunu Amarasinghe)

The Liberal government says it is giving $3.5 million for two projects to help improve access to abortion services in Canada.

The funding stems from a year-old budget pledge to spend $45 million over three years to help organizations make sexual and reproductive information and services more available.

It comes as the re-emergence of the landmark Roe v. Wade case in the United States brings renewed attention to the issue on both sides of the border, and the day before the annual anti-abortion "March for Life" rally on Parliament Hill.

Action Canada will use the federal money to expand programs that provide accurate information about sexual and reproductive health and referrals, as well as help cover women's travel and accommodation costs.

The National Abortion Federation will use funding to give women seeking abortion services financial and logistical help, as well as train health-care providers in providing those services.

The 2021 budget projected $16 million would already be allocated from the new funding by now, and advocates say while the money is welcome, more permanent funding for sexual and reproductive health care is needed.

Health Canada says nine contribution agreements worth $15.2 million have been signed, including these two announced for the first time Wednesday that involve access to abortion.

There are another five projects involving LGBTQ communities and two addressing youth.