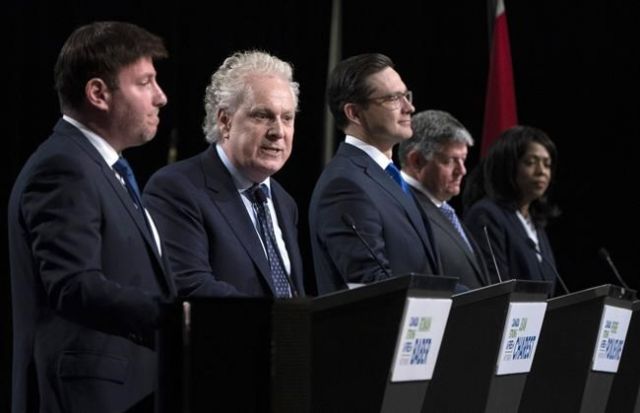 Conservatives tuning into the next leadership debate hope to see the six candidates vying for the party's top job lay off the personal attacks, says one campaign manager.

"At the end of the day, all of us are part of the Conservative family and we're going to have to come together to fight the next election and be successful."

Charest, along with the contest's other five contenders, are headed to Edmonton to participate in the party's first official leadership debate happening in English on Wednesday, which will be followed by one in French two weeks later.

Party members and interested Canadians had a chance to see how five out of the six candidates reacted to one another when they took the stage in Ottawa last week for an unofficial debate, held as part of a conference for conservative faithful.

They saw an hour and a half of fiery exchanges, which included Leslyn Lewis laying into fellow MP Pierre Poilievre for his stand against COVID-19 mandates and Poilievre going after Charest for his past work with Chinese telecommunications giant Huawei. Poilievre also accused Charest of being a Liberal for having led the Quebec Liberal party.

"Our members are highly engaged,” said Andrew Scheer, the former Conservative leader and Saskatchewan MP who is now working to get Poilievre elected.

“Our members want to see how leadership candidates can handle the sparring from each other, because it's going to be a lot tougher in a general election campaign.”

Speaking ahead of last week's debate, Scheer said Poilievre — who has earned the reputation of being a bulldog through years of aggressive performances in the House of Commons — also comes with a deep knowledge of policy.

"He is one of the most well prepared members of Parliament I've ever seen," Scheer said.

Laryssa Waler, who previously served as Ontario Premier Doug Ford's director of communications, said debates take a back seat to the party memberships candidates have to sell to supporters by June 3, if they hope to count on them picking their name on the party's ranked ballot.

She said while watching debates, it's important to remember most Conservatives have already chosen which candidate to back. Those on stage are also looking for opportunities to chip away at the support of their rivals, Waler added.

"Everybody else on that stage needs Pierre not to get 50 per cent," she said, referring to the fact that a candidate must achieve majority support to be declared the winner when the ballots are counted on Sept. 10.

Poilievre returns to Edmonton after holding a rally in the city last month that drew more than 2,000 people. His raucous events have been a defining feature of his campaign, which insiders say is a sign of momentum rarely seen in leadership races.

One big difference between last week's debate and Wednesday's will be the presence of Patrick Brown, the mayor of Brampton, Ont. His campaign said he decided to forgo last week’s event to sell memberships. He did, however, declare that he “won” in an email sent out afterwards.

Brown, like Charest, sees a path to victory by bringing in droves of new Conservative members, rather than trying to win over the existing grassroots. Brown is specifically focusing his efforts on drawing support from racialized Canadians, including those with Muslim, Tamil, Sikh, Chinese or Nepalese heritage.

Michelle Rempel Garner, the longtime Calgary MP who is a co-chair on Brown’s campaign, said the party needs to grow in these communities in large cities to be more competitive against the Liberals.

As such, she hopes those watching Wednesday's debate will put themselves in the shoes of an undecided voter and ask themselves who is the best suited to make sure the Conservative party wins the next federal election.

Topics expected to be covered at Wednesday's debate include the future of energy and the environment, law and order, the cost of living and the North.

Rempel Garner said the party would be wise to organize the topics in such a way that candidates address issues that have in the past held Canadians back from voting Conservative.

"Those are all issues that have repeatedly dogged our party over several elections."