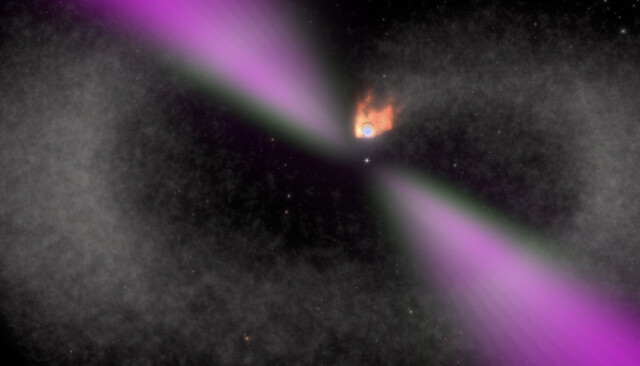 Photo: NASA
An illustrated view of a black widow pulsar and its stellar companion. The pulsar's gamma-ray emissions (magenta) strongly heat the facing side of the star (orange). The pulsar is gradually evaporating its partner.

Astronomers at the Massachusetts Institute of Technology — with assistance from Canadian researchers — have announced a new neutron star, or pulsar, has been discovered 3,000 light years away from Earth.

Categorized as a “black widow binary” and located in the Milky Way, the pulsar is named ZTF J1406+1222 and is circling a smaller companion star that it will eventually absorb (hence the black widow category).

It has the shortest orbital period yet identified for pulsars by circling the companion star every 62 minutes. As well, a third star orbits the two inner stars every 10,000 years, making it a “triple black widow.”

Such a unique formation is, so far, puzzling scientists.

“It’s a complicated birth scenario,” says Kevin Burdge, a Pappalardo postdoctoral fellow in MIT’s department of physics. “This system has probably been floating around in the Milky Way for longer than the sun has been around.”

Astronomers know of about two dozen black widow binaries in the Milky Way.

Burdge’s team found the pulsar by detecting flashing light from the companion star and not by the usual means of detecting pulsars with gamma and X-ray radiation emitted by the pulsar.

That companion star is said to be many times hotter when facing the pulsar.

“I thought, instead of looking directly for the pulsar, try looking for the star that it’s cooking,” Burdge explained in an MIT statement May 4.

“This system is really unique as far as black widows go, because we found it with visible light, and because of its wide companion, and the fact it came from the galactic centre,” said Burdge. “There’s still a lot we don’t understand about it. But we have a new way of looking for these systems in the sky.”

Neutron stars can produce important information to advance the understanding of general relativity.