Racism in the military 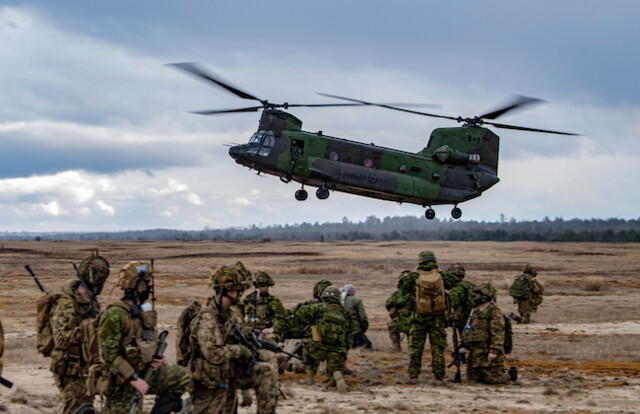 A scathing new report on racism in the Canadian Armed Forces says the military is not doing enough to detect and prevent white supremacists and other extremists from infiltrating its ranks.

The report released by Defence Minister Anita Anand this morning also takes the military to task for not doing enough to address racism and discrimination over the past two decades.

The report is the result of a yearlong review by a panel of retired Canadian Armed Forces members following concerns about systemic racism in the military and links between some members and hate groups.

The report says military efforts to prevent extremists from serving in uniform are both inefficient and insufficient despite promises from senior commanders to address the issue.

It calls for more involvement from police and intelligence agencies and better training to recognize signs of extremism and hate.

The report says the military must act on hundreds of recommendations made in previous studies and reviews which the panel says have fallen by the wayside over the past 20 years.

Defence Minister Anita Anand will release a highly anticipated report this morning that is expected to take the military to task for not doing enough to address racism in the ranks over the past two decades.

The report is the result of a yearlong review by a panel of retired Canadian Armed Forces members tasked with identifying ways to address hate, racism and discrimination in the ranks.

The review was launched in December 2020 amid concerns about systemic racism in the military, as well as reported links between some members with hate groups, right-wing extremism and white supremacy.

An internal document summarizing the panel's key findings obtained by The Canadian Press says the military will be criticized for failing to act on past reviews and recommendations to address the problem over the past 20 years.

"The report strongly reiterates that the Defence Team must place a greater emphasis on previous recommendations that were made as it believes the organization has the knowledge and expertise to implement them in order to ensure effective and meaningful culture change," reads the summary dated April 14.

The panel also calls for the military to "elevate the voices of those with lived experiences," and puts an emphasis on tracking the implementation of past recommendations to ensure real culture change in the ranks.

"The advisory panel underscore in the report, the only way change will occur is with more accountability starting at the unit level and moving up at every level in the organization," the summary reads.

There have been mounting concerns about racism in the Armed Forces and links between some military personnel and hate groups following a spate of incidents and reports that some right-wing groups are actively recruiting service members.

Those incidents include a group of sailors associated with the Proud Boys who disrupted a Mi’kmaq ceremony in Halifax in 2017 and media reports of other members associating with Neo-Nazi groups such as the Atomwaffen Division.

A military-intelligence report in 2018 said officials were aware of 30 active service members who were part of a hate group or had made statements that were discriminatory or racist.

Anand has had the panel's report since early January, but her failure to release it until now had been questioned by the office of military ombudsman Gregory Lick.

His office conducted its own study of the military's efforts to increase diversity in the ranks and will release those in early May.

"We have repeatedly asked to see the panel's report through multiple channels prior to its release for months now," said ombudsman's office spokesman Andrew Bernardo, who added the results of Lick's review "aren't pretty."

"Whatever new initiatives are stood up as a result of the panel's report, the ombudsman has been adamant that the same mistakes are not repeated, and that the department and the military need to do things differently."

"Others will take more time and require further review and consultations across the organization due to the scope of the recommendations, their complexity and the requirement to collaborate with external partners."

The work is being co-ordinated by a new, internal committee tasked with reforming the military's culture based on the panel's report as well as several others, including retired Supreme Court justice Louise Arbour's upcoming report on addressing sexual misconduct in the ranks.

The panel is also expected to call for "uncomfortable" conversations about race and white privilege, and how systemic barriers have negatively impacted Indigenous, Black and racialized troops.

The panel's report is also expected to speak to the impact of colonialism, and the current imbalance in the share of military personnel who are White men compared with the rest of the Canadian population.

"The panel members want to stress that they are not in any way diminishing the contribution of white men within the Defence Team; they are a symptom of the problem," the summary document reads.

The document includes a proposed response to criticisms that the panel's report is simply "wokeism at play," saying: "We have found that the concept of wokeism continues to be misaligned with its original meaning, to be socially aware and well-informed."

And while the military is currently focused on the war in Ukraine and other threats, the summary document describes culture change as critical to recruiting and retaining enough troops to address those challenges.

"It is important that we create an equitable and inclusive environment so we are better positioned to recruit and retain the people we need to address the pressing issues of the day," reads the summary.

"Without our people we cannot address or fight the wars at hand. People only stay where they feel they belong."