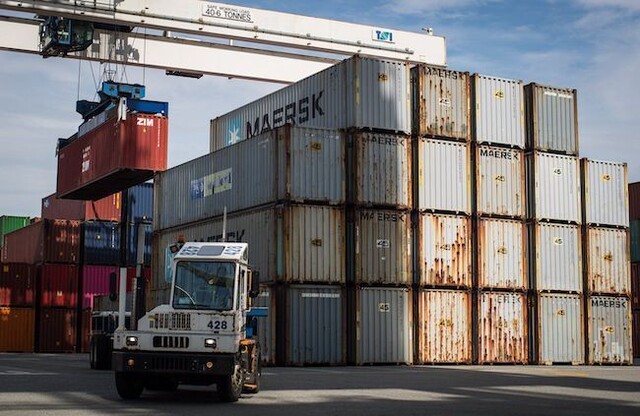 Photo: The Canadian Press
Some of the 69 containers of Canadian trash that were returned to Canada from the Philippines in 2019.

In the year since new rules to slow global exports of plastic waste took effect, Canada's shipments rose by more than 13 per cent, and most of it is going to the United States with no knowledge of where it ultimately ends up.

"I'm very worried about that and I think we clearly have to do better," Guilbeault said in an interview.

"If we're shipping plastics that are aimed at recycling, we better make sure that that's what happens. And frankly, right now, it's not clear to me that is always the case and in fact there's been a number of instances where it's not."

Guilbeault said he is talking to his officials about what can be done to fix the problem "because right now we're not doing a very good job."

Canada's shaky history on plastic waste exports got international attention in 2019, when shipments of garbage falsely labelled as plastics for recycling led to a diplomatic standoff with the Philippines.

It put a spotlight on the global trade in garbage, which mostly saw wealthy countries putting their trash on container ships bound for the developing world where it often ends up in landfills or burned, causing a raft of environmental and human health repercussions.

In the wake of that embarrassment, Canada said it would work with the Canada Border Services Agency to halt exports of contaminated plastic and agreed to amendments to the United Nations Basel Convention on hazardous waste that added mixed plastic waste to the substances covered by the conventions rules.

On paper that meant that after Jan. 1, 2021, Canada should only be able to export waste to other convention members, and such exports would need prior informed consent from the importing country, and confirmation of how the waste was disposed.

But a few months before the amendments came into force Canada quietly signed an agreement with the United States allowing for free flow of plastic waste between the two, even though the U.S. is not a party to the Basel Convention. The agreement is allowed under Basel rules, but because the U.S. is not bound by the convention, it can do what it likes with the waste, including shipping it anywhere else it wants.

Trade data collected by the Basel Action Network shows more than 340 million kilograms of plastic waste was exported by the U.S. to just four countries in 2021 — Malaysia, Indonesia, India and Vietnam.

Kathleen Ruff, head of Right On Canada which lobbies against the exports of all hazardous waste, called the Canada-U. S. agreement "a colossal loophole that violates the Basel Convention by allowing us to export huge amounts of plastic and other wastes to the U.S. with no controls to prevent our wastes from being then shipped to developing countries."

"This is not the environmental leadership we were promised," she said.

The plastic amendments to the Basel Convention were intended to start cutting back on total exports of plastic waste. But in the 12 months after the amendments kicked in, affecting most waste shipments to Basel signatories, Canada's shipments of plastic waste rose by 13 per cent to 170 million kilograms, roughly the weight of 17 billion half-litre plastic bottles.

Its shipments to the U.S. totalled 158 million kilograms, an increase of 16 per cent from 2020 and 92 per cent of total exports.

He said if Guilbeault is serious about plastic waste, he would get Canada to sign the full Basel Convention amendment that would ban the export of hazardous waste, including most plastics, with or without the consent of an importing nation.

One hundred of the 188 Basel Convention parties have ratified that amendment but Canada is not among them.

"Until and unless Canada joins the 100 countries that accept that amendment, they're not bound by it," he said. "And the amendment makes it illegal to export hazardous waste from Canada to developing countries. So I guess the question is, why does Canada refuse to join the rest of the world."