People are 'fed up' 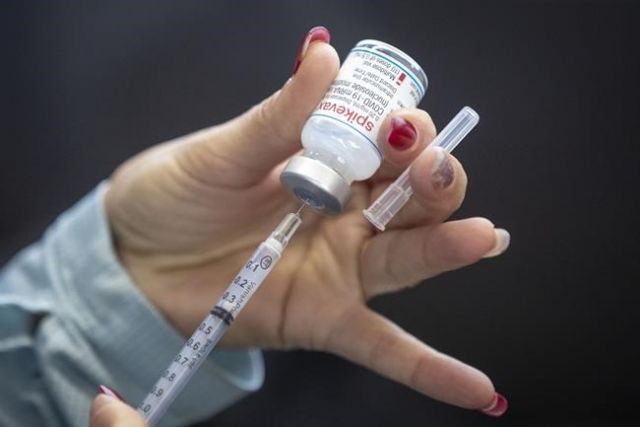 Photo: The Canadian Press
A person draws out Moderna vaccine during a drive through COVID-19 vaccine clinic.

The Quebec government announced the loosening of some COVID-19 restrictions Tuesday, following the lead of Ontario and other provinces amid indications the Omicron surge may be peaking in some areas.

Quebec Premier François Legault said the province would adopt a go-slow approach, which will see gathering limits raised on Monday for private functions, as well as the reopening of restaurants at 50 per cent capacity and a resumption of some sports activities for those under 18. Other restrictions will be eased for religious, entertainment and sports venues on Feb. 7.

"We are all aware that a lot of Quebecers are fed up, they're fed up with the restrictions," Legault told a news conference in Montreal. But he added that any reopening has to be cautious and gradual. "We have to take it easy," he said.

Last Thursday, the Ontario government confirmed it would start easing health protection orders by boosting the size of social gatherings and reopening businesses such as restaurants, gyms and cinemas with capacity limits — part of a plan to lift all constraints by mid-March.

Premier Doug Ford said the phased reopening was in response to public health indicators showing "that the worst is behind us." The premier pointed to a reduced rate of hospital admissions and a declining percentage of positive COVID-19 tests.

In Quebec, health officials reported 85 more deaths linked to COVID-19, and the province's Health Department reported that hospitalizations fell by 21, to 3,278. The number of people in intensive care remained unchanged at 263.

Meanwhile, GoFundMe has frozen the $4.2 million raised over the past 11 days by organizers of a truckers protest that is calling for an end to vaccine mandates for truck drivers who cross the Canada-U.S. border. GoFundMe has said the money will remain locked until it receives documentation about distribution of the cash.

The western separatist Maverick Party set up the GoFundMe page, saying the money would be used to cover the cost of accommodation, food and fuel for trucks taking part in the "Freedom Convoy," which is expected to arrive in Ottawa this weekend.

The convoy set off from Vancouver on Sunday and passed through Regina late Monday with 1,200 rigs joining the procession, according to police.

The trucks later converged in nearby Balgonie, Sask., where a Calgary woman, who would only give her name as Delores, said the convoy was more than a protest against vaccine mandates. She said it's also about an "us versus them" mentality that applies to the vaccinated and unvaccinated.

Under new rules, Canadian truckers must be fully vaccinated if they want to avoid a 14-day quarantine when they cross the border from the United States.

In Newfoundland and Labrador, students returned to school Tuesday after learning from home since Jan. 4, when the province's COVID-19 case counts were still spiking. All students were required to take two rapid tests before classes began. Still, the province’s teachers association says its members feel it's not yet safe to open schools.

The province reported a slight drop in COVID-19 hospitalizations Tuesday, with 20 receiving care, down one from the day before — but five of those patients remain in critical care.

In New Brunswick, three more people died from the disease and hospitalizations continued to rise. The province's chief medical officer, however, said the hospitalization increase was below previous projections, which she attributed to people reducing their contacts.

Nova Scotia reported five COVID-19-related deaths Tuesday. In total, 136 people in Nova Scotia in the province have died after being infected with the novel coronavirus. As of Tuesday, there were 304 people in hospital who had tested positive for COVID-19, including 92 patients in a specialized care unit.

Health officials in P.E.I. confirmed Tuesday that another person had died as a result of COVID 19, bringing the province's total to nine deaths since the pandemic began.

In Nunavut, the Baffin Island community of Igloolik remained under a strict lockdown as COVID-19 continued to spread among the 1,600 residents. Chief public health officer Dr. Michael Patterson said most of the calls to the territory's COVID-19 hotline have been from Igloolik, where household exposures have risen dramatically.