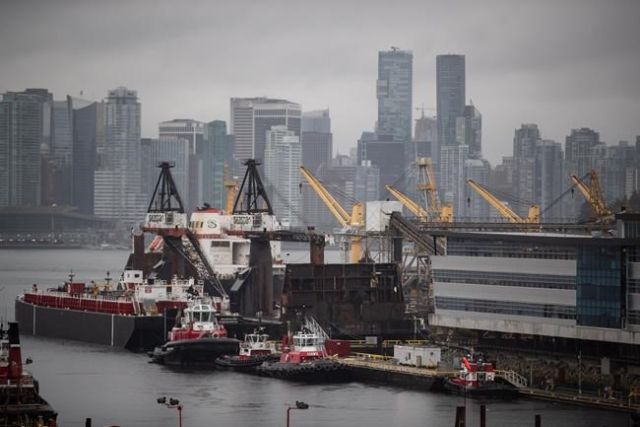 Photo: The Canadian Press
Vessels are seen docked at Seaspan Shipyards in North Vancouver, B.C., Friday, Oct. 9, 2020. The federal government says it is being forced to retire one of the country's most important science vessels, even as work on its replacement has hit yet another snag. THE CANADIAN PRESS/Darryl Dyck

The federal government is being forced to retire one of the Canadian Coast Guard’s important science vessels, dealing a blow to the country’s ocean research capabilities for at least the next few years.

The Canadian Coast Guard announced Wednesday that age had finally caught up to the 59-year-old CCGS Hudson, and the ocean research science vessel is being decommissioned even though a replacement will not be ready until at least 2025.

The difficult decision came after one of the ship's motors broke last November and officials determined it was too expensive to both repair it and upgrade other outdated parts of the vessel to meet new regulations.

The breakdown was the latest in a series of problems for the coast guard’s oldest serving ship, which had undergone millions of dollars in repairs and retrofits in recent years in a desperate attempt to keep it in the water.

Those investments were made necessary after several delays in the delivery of a replacement offshore oceanographic science vessel from Seaspan Shipyards in Vancouver, which was originally supposed to finish the new vessel in 2017.

Aside from the delays, the new vessel has been the subject of numerous cost overruns. The Canadian Press reported in the summer that the original $108-million budget had ballooned to nearly $1 billion.

The Canadian Coast Guard is now scrambling to find alternatives to conduct what it has previously described as “vital” research of Canada’s oceans, which has become even more important due to concerns about climate change.

“The Canadian Coast Guard is working closely with Fisheries and Oceans Canada to evaluate the near- and long-terms impacts on programming and developing a plan to mitigate these impacts,” the agency said in a statement.

“Discussions are focused on which parts of the science program can be completed by other Canadian Coast Guard vessels, by chartered vessels, or through the use of other technology.”

University of Calgary shipbuilding expert Timothy Choi said the loss of the Hudson before its replacement is ready will leave a gap, though it’s too early to tell how significant the damage will be.

“For sure, our offshore research capacity outside the Arctic will be hindered, though that depends on what alternative solutions they're able to find in the interim,” he said.

The Hudson is only the latest federal ship to have been retired before a replacement is ready thanks to delays across much of the government’s federal shipbuilding strategy.

The Royal Canadian Navy has been operating without any destroyers since 2017, with the first replacement not expected until at least 2032. Those new vessels will also replace the navy’s 12 Halifax-class frigates.

The navy has also been forced to lease a converted civilian ship for the past few years as a support vessel since retiring its own vessels in 2014. Seaspan is currently working on two permanent replacements, which have experienced their own delays.

Seaspan had recently promised to deliver the first new support ship in 2023, and the second in 2025 after finishing the Hudson’s replacement. However, that already tenuous schedule now appears up in the air.

“Seaspan is doing a delicate dance,” said Jeff Collins, an expert on military procurement at the University of Prince Edward Island.

“Any slippage on their part further delays replacement and risks driving up costs, especially in this inflationary period … Schedule is king with the (federal shipbuilding strategy), and especially for Seaspan.”