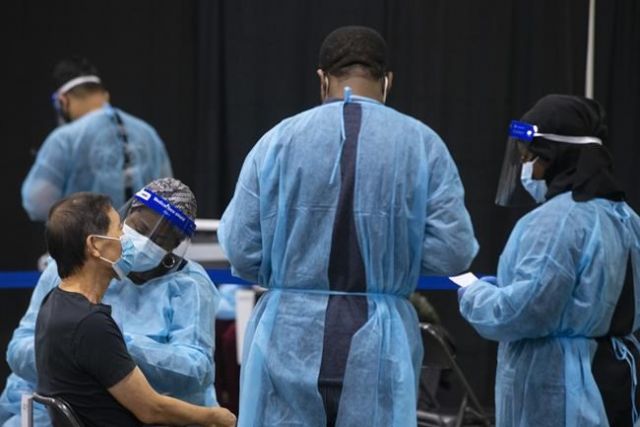 When news of the first cases of COVID-19 began cropping up in Canada in early 2020, Linda Silas was one of the first to ring alarm bells about the lack of proper personal protective equipment for health workers.

While early indications showed the virus was spread by droplets that settled on surfaces, Silas, president of the Canadian Federation of Nurses, urged health authorities to learn from the SARS outbreak of 2003 and take the highest level of precaution.

Now she knows she was right — the virus is airborne — but she is still desperately calling for more protective equipment for nurses two years later.

Regional unions across the country report that nurses who have requested fit-tested respirators still can't get them in some cases, despite the Omicron variant being far more transmissible than previous variants.

The shortage of healthy nurses to address the massive wave of the Omicron variant has meant hospitals and other health institutions have deployed nurses with confirmed cases of COVID-19, and still some are not offered appropriate masks, she said.

"These vulnerable patients might have a COVID positive staff treating them, and without the proper PPE it's plain dangerous," she said.

Canada's chief public health officer, Dr. Theresa Tam, describes the spread of COVID-19 as a cloud of smoke coming from someone's mouth and nose. She and other medical officers have suggested the public use more effective masks to protect themselves.

Silas said often in places such as vaccine clinics, members of the public seem better outfitted with the proper protective equipment than the health workers.

Different hospitals seem to be taking different approaches when it comes to providing PPE to nurses, which doesn't make sense, she said, "because the science is the science."

"The problem has always been the supply chain. The outcome of the limitations of our supply chain is not being able to access those protective products that are so important in terms of reducing the risk of transmission of this virus to our workforce, and also to our patients," Snowdon said in an interview with The Canadian Press.

The scarce supply of PPE may have been more understandable in the early days of the pandemic, but critics like Silas question how Canada could still be in a similar situation in many parts of the health system.

The answer, Snowdon said, is that the infrastructure was so poor to begin with.

"We're building the bridges we're driving over," she said.

In other sectors, like construction, essential workers would not be in the same situation, Silas said, because they would have the right to refuse to work in unsafe conditions.

But health workers can't do the same without the ethical guilt of abandoning patients. It's the same guilt that has nurses working 16 to 24-hour shifts, or taking on large patient loads, she said.

"It's that ethical guilt that presses on the health-care workforce."