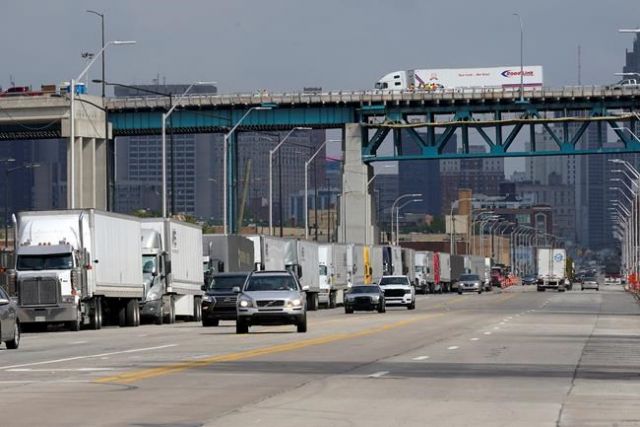 Photo: The Canadian Press
Traffic backs up on Fort St. next to the Ambassador Bridge, Monday, Oct. 4, 2021, in Detroit. Truckers say the federal government's backtrack on a slated vaccine mandate changes little for the industry and an already strained supply chain. THE CANADIAN PRESS/AP/Carlos Osorio

The federal government's last-minute decision to backtrack on a vaccine mandate for truckers will do little to relieve pressure on strained supply chains or prevent price hikes for food and other goods, industry insiders say.

The Canada Border Services Agency said Wednesday evening it would not require unvaccinated Canadian truck drivers to quarantine when they re-enter the country. The decision reversed plans announced in mid-November — and reiterated as recently as that morning in a video conference between federal officials and industry representatives — that were on track to take effect Saturday.

However, unvaccinated American big-riggers will still be turned away at the border starting this weekend, with the United States preparing to impose similar restrictions on Canadian truckers on Jan. 22.

Up to 26,000 of the 160,000 drivers who make regular cross-border trips will be sidelined as a result, adding further bottlenecks and potential price hikes to the flow of goods ranging from produce to auto parts and medical devices, say the Canadian Trucking Alliance and the American Trucking Associations.

Bison Transport CEO Rob Penner says unvaccinated long-haulers will be just as hamstrung as they were before Ottawa's surprise decision, since truckers of both nations will be barred from entering the other unless they're inoculated.

"I'm a little fearful that this is really just semantics, that they can make each other look like the bad guy and it doesn't really change anything," said Penner, whose Winnipeg-based fleet of 1,000 tractor-trailers carries retail goods and food and beverages into Canada.

The sector continues to push for a delay on the vaccine mandate in both countries, but Penner holds out little hope based on the government's move Wednesday.

"If Canada has this insistence that U.S. truckers must be double vaccinated to come in, then what typically happens is that the U.S. would take the same approach," he said.

Some 30,000 trucks roll across the border each day hauling nearly $850 million in freight, according to 2020 figures from the U.S. Bureau of Transportation Statistics.

Teamsters Canada, which represents 15,000 truckers in Canada, says the logistics chain is already missing tens of thousands of drivers due to poor working conditions.

"Blaming professional drivers is not the answer," spokesman Stéphane Lacroix said in an email, referring to possible cost increases or stock shortages.

"It is the labour shortage that is primarily responsible, not the pandemic and its impact."

Government officials met virtually with union and corporate representatives between 11 a.m. and noon on Wednesday, where the latter were told that the trucking industry's exemption from the vaccine mandate would end Saturday as planned, according to Canadian Trucking Alliance president Stephen Laskowski.

Less than nine hours later, the Canadian Border Services Agency told The Canadian Press that Ottawa would abandon those plans for Canadian big-riggers, and maintain them for their U.S. counterparts.

“With the increased number of cases as a result of the Omicron variant, we are seeing across the country and around the world, an impact on essential sectors that can result in labour shortages, putting a strain on sectors like transportation," Laurel Lennox, a spokeswoman for Transport Minister Omar Alghabra, said in an email Tuesday.

"We also know that vaccination is the best way to fight this pandemic, to protect the health and safety of workers, and to keep our economy moving."