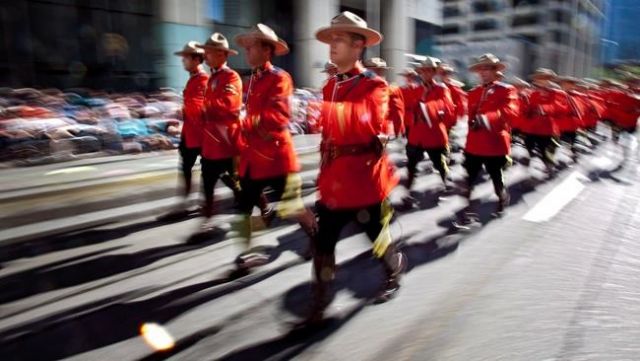 Photo: The Canadian Press
Members of the RCMP march during the Calgary Stampede parade in Calgary, Friday, July 6, 2012.THE CANADIAN PRESS/Jeff McIntosh

Mounties waging a class action against the RCMP over bullying and harassment are telling the Supreme Court of Canada to reject a federal move to have the suit thrown out.

The lead plaintiffs, veteran RCMP members Geoffrey Greenwood and Todd Gray, say they were among those subjected to a culture of systemic intimidation and harassment that was fostered and condoned by the RCMP leadership.

Last September the Federal Court of Appeal upheld a judge's order certifying the action and defined the class as RCMP members and reservists who served from Jan. 1, 1995, until the recent unionization of affected members.

In a statement, RCMP Commissioner Brenda Lucki said the government is seeking clarity on whether the courts should certify a class action relating to workplace disputes when there are already administrative resolution processes in place.

"The Government of Canada has a range of comprehensive administrative mechanisms to deter, detect, investigate, correct and provide compensation to RCMP employees for workplace disputes, including harassment complaints," Lucki said.

The RCMP has made an ongoing effort to address harassment in the organization, she added. "In response to several RCMP and government commissioned reports and recommendations, we have implemented numerous policy and program change initiatives to create a more respectful, inclusive and diverse workplace."

In a submission to the Supreme Court urging it to hear the appeal, federal lawyers say that where Parliament has provided for a specialized administrative regime for the resolution of workplace disputes, the role of the courts is limited to exercising exceptional jurisdiction in individual cases.

The submission says allowing otherwise vastly expands the reach of the courts "into the everyday workplace disputes of non-unionized employees."

"Such a result would do grave harm to the broad mosaic of statutory recourse mechanisms that Parliament has enacted for the efficient resolution of workplace disputes in the RCMP and across the federal public service."

Greenwood and Gray, on behalf of the class, argue that before unionization of the force, the only recourse was through personnel in the chain of command who were either involved in such behaviour themselves or protected the perpetrators.

The Crown's application for leave to appeal to the Supreme Court "is the latest chapter in its decades-long effort to evade accountability" for the RCMP's failure to tackle a culture of bullying and intimidation, they say in a submission to the top court.

Federal lawyers mischaracterize the systemic negligence claims in the action "as a collection of benign, isolated workplace disputes, analogous to those found in any other workplace," they argue.

The submission also rejects the notion a "broad mosaic" of internal processes and federal statutes could sufficiently address any such claims with no need for the courts to get involved.

"The absence of a third-party adjudicative framework meant that civil courts were the only way for RCMP members to obtain recourse for claims arising from the Crown's failure to provide them with a workplace free from harassment, intimidation, and bullying."