Radiologists warn of growing backlog in medical imaging due to pandemic 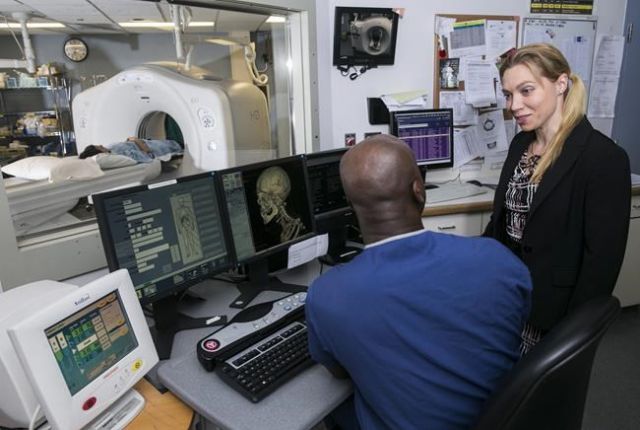 Radiologists are warning that Canadian hospitals are in serious need of more equipment and staff to deal with medical imaging backlogs that the country was already facing before the COVID-19 pandemic began.

Dr. Gilles Soulez, president of the Canadian Association of Radiologists, said wait times for medical imaging that is critical for diagnoseswas already more than the recommended one month when the pandemic began in March 2020. On average, he said, Canadians were waiting 50 to 82 days for a CT scan and 89 days for an MRI.

Now with the COVID-19 Omicron variant threatening to overwhelm health-care systems again, many more of those appointments are either being delayed or cancelled, said Soulez, who is also a radiologist at the Centre Hospitalier Université de Montréal and a professor at the University of Montreal.

“Medical imaging is really at the cornerstone of any medical decision,” he said. “If you have any problems relating to cancer, you need to have the CT scan to identify the concern and plan your treatment.”

Early detection of many diseases is also key to a successful recovery and cure, he said.

“I would say that almost 80 per cent of patients coming into the hospital will need some sort of medical imaging."

Soulez added that not only is it important for diagnosing, imaging is also used to track a patient’s progress during treatment.

A recent survey from the Canadian Association of Radiologists indicated that 75 per cent of its members had not reduced their backlog of medical imaging. Also, 30 per cent said they believe that wait times will never return to pre-pandemic levels.

Soulez said more minimally invasive procedures are being done, and they need to be guided by equipment such as X-rays and CT scans.

"People are waiting a long time to get those procedures," he said. "They're important because they require minimal hospitalization and are less costly."

Dr. Ania Kielar, the association's vice-president and a Toronto-based radiologist, said the Ontario government has already asked hospitals to decrease the amount of scanning by 30 per cent due to escalating COVID-19 case counts.

"By having to ramp down our outpatient imaging for radiology, this is now exacerbating what wasalready a difficult situation for us," she said.

Kielar said all provinces need more equipment and more specialized staff to use the technology to its maximum potential.

"Right now, the equipment that we have, which in itself is not enough, is being used very extended hours and, unfortunately, we just don't have enough people to run what we have, so it's a two-sided problem," she said.

During the last federal election campaign, the Liberals promised $6 billion to the provinces to help address the wait for some procedures.

In a statement Monday, Health Canada said the federal government is spending more than $19 billion to support provinces and territories through its Safe Restart Agreement.

"The agreement includes $700 million to help ensure health-care systems are ready for possible future waves of the virus and federal funding is being used by some provinces and territories to address backlogs and reduce waits for care," the statement said.

The federal agency did not say whether any money would be reserved for more medical imaging equipment and technicians.

The office of federal Health Minister Jean-Yves Duclos did not immediately respond to a request for comment.

Kielar said she hopes the federal government acts on its promise because hospitals across the country will continue to be under strain.

"We cannot catch up with the amount of equipment and the human health resources we have," she said.

"But at the end of the day, it's the patients who are suffering and that is the hardest part for us."