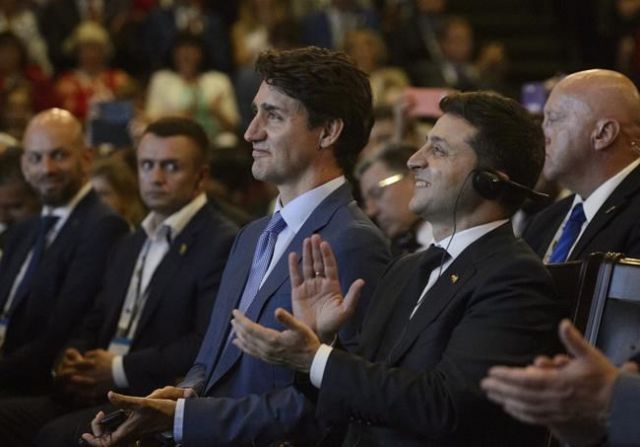 Photo: The Canadian Press
Canadian Prime Minister Justin Trudeau and Ukrainian President Volodymyr Zelensky react during a speech by Minister of Foreign Affairs of Canada Chrystia Freeland at the University of Toronto during the Ukraine Reform Conference in Toronto, on Tuesday, July 2, 2019. THE CANADIAN PRESS/Andrew Lahodynskyj

Ukraine President Volodymyr Zelenskyy told Prime Minister Justin Trudeau that the West must be ready to impose further sanctions against Russia for its military buildup on his country's eastern border.

Zelenskyy delivered that message to Trudeau in a Tuesday morning telephone call, which came on the eve of a key meeting in Brussels between the 30-country NATO alliance and Russia.

The meeting is aimed at defusing the ongoing tension between the West and the Kremlin as the Russian military is massing on Ukraine's eastern border, stoking fears of an invasion.

Russia has called on NATO to guarantee it won't expand eastward into Ukraine, a demand the alliance and Ukraine itself flatly reject.

"The position of Western countries in the dialogue with Russia must remain firm and decisive. It is necessary to be ready for the immediate introduction of a preventive package of sanctions against Russia to counter the Kremlin's aggressive intentions," the Ukraine foreign ministry quoted Zelenskyy as saying.

He reiterated to Trudeau that the West should not back down to Moscow's demands on curbing NATO expansion.

"No one but Ukraine and NATO should influence the process of our integration with the alliance," Zelenskyy said.

According to a Canadian account of the phone cal, Trudeau "reaffirmed Canada’s steadfast support for the sovereignty and territorial integrity of Ukraine and emphasized that any military incursion into Ukraine would have serious consequences, including co-ordinated sanctions

"He emphasized the co-ordination underway between Ukraine’s partners in order to stand united in the face of Russian provocation.

Zelenskyy also pushed Canada to extend its contribution of 200 military personnel to a NATO military training mission in Ukraine that is set to expire at the end of March.

The two leaders also "agreed on the need to make joint efforts to get adequate compensation" for the families of the 176 passengers who were killed when the Iranian military shot down Ukrainian International Airlines Flight 752 two years ago. The majority of those killed were from Canada as well as nationals of Ukraine, Sweden, Britain and Afghanistan.

Earlier Tuesday, Ukraine's foreign minister said any NATO concession to Russia that it would not expand the alliance eastward would be a strategic defeat.

"The Russian Federation had initiated talks on the so-called 'security guarantees' to raise the stakes to the maximum by making intentionally unacceptable demands," said Ukraine Foreign Minister Dmytro Kuleba in a statement that was provided by the Ukrainian Embassy in Ottawa.

"The situation appears especially cynical as Russia is demanding security guarantees at a time when its over 100,000-strong force is brandishing arms on Ukraine’s borders, holding Crimea hostage and fighting in Donbas, Russian special services are undermining security at Belarus’s borders with Poland and Lithuania, and gas supplies are being transformed into an instrument of foreign policy."

In 2014, Russia annexed Ukraine's Crimean Peninsula after the ouster of its Moscow-friendly leader and threw its weight behind a separatist insurgency in the country's east, where more than seven years of fighting has killed over 14,000 people.

A 2015 peace deal brokered by France and Germany has helped end large-scale battles, but frequent skirmishes have continued and efforts to negotiate a political settlement have failed.

Zelenskyy met Tuesday with French and German officials who visited Kyiv after talks in Moscow the previous week to discuss prospects for another four-way meeting of the leaders of Russia, Ukraine France and Germany on the conflict.

"It's time to have substantive talks on ending the conflict, and we are ready to make the necessary decisions during a new summit of the four countries' leaders," Zelenskyy said.

As Wednesday's talks drew closer, the divide between the United States and Russia remained wide.

"We will not allow anyone to slam NATO's open-door policy shut," said U.S. Ambassador Julianne Smith.