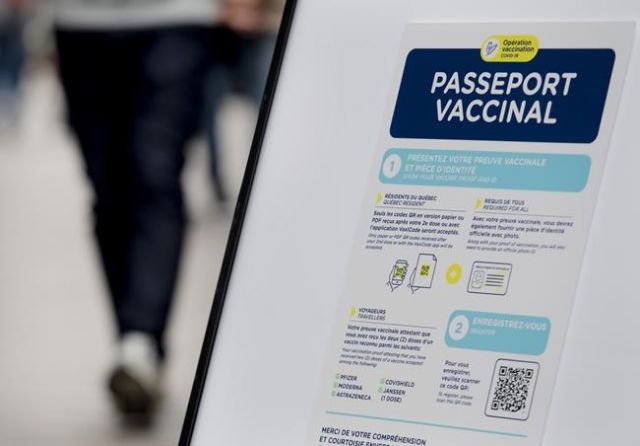 As Quebec officials consider tightening the rules for the unvaccinated, health experts in the province say expanding the vaccine passport system is justified because of the high number of COVID-19 patients in hospital who have refused to be jabbed.

Others, however, say the people who are rejecting COVID-19 vaccines are doing so out of ideology and likely won't be swayed by the government's latest restrictions.

Last week, Health Minister Christian Dubé said proof of vaccination will be required to shop at Quebec's cannabis and liquor monopolies starting Jan. 18 and that the passport could be expanded further to include businesses such as shopping malls and personal care salons. Quebec's college of physicians on Friday said the vaccine passport should be required for places such as large department stores, libraries and museums.

Dubé has repeatedly said that about 10 per cent of Quebec adults are unvaccinated but represent about 50 per cent of COVID-19-related hospitalizations. But data published by the Health Department on Monday indicated that 32 per cent of the 4,094 people hospitalized with COVID-19 in the past 28 days had either been unvaccinated or were fewer than 14 days removed from their first dose.

Dr. Donald Vinh, an infectious disease specialist at McGill University Health Centre, said he supported an expanded vaccine passport system because it could encourage more people to get vaccinated. Any reduction in the number of COVID-19 patients in Quebec's hospitals would help, he added.

"If anywhere between a third to a half of those hospitalizations could be prevented, we would not be having a concern about our surge capacity," he said in an interview Monday, adding that the vaccine passport is necessary "not to eliminate hospitalizations but to prevent those that are preventable."

Quebecers must show proof of vaccination to enter places such as gyms, restaurants and bars, which have been closed since mid-December. Liquor and cannabis stores, however, remain open, as are malls and other retail stores.

Vardit Ravitsky, a professor of bioethics at Université de Montréal, said that as the pressure on the health-care system rises, so does the justification for measures that push people to get vaccinated.

"Right now, the numbers are scary, because the rate of transmission, the rate of infection is very high and the risk is to our health-care system," she said in an interview Monday. "Therefore, the risk is to everybody and especially to vulnerable people."

Ravitsky said she sees vaccine passports as way to encourage people to get vaccinated — making them less likely to require a hospital bed.

While there are other measures that could be taken to encourage vaccination, such as fines, she said the passport system is fairer than the alternatives. Given the risk to the health-care system, Ravitsky said she sees the vaccine passport as a justified limit on freedom.

"Freedom is never absolute and without limits," she said. "I don't have the freedom to drink a bottle of wine and get behind the wheel."

Kim Lavoie, co-director of the Montreal Behavioural Medicine Centre, said that while she agrees the government should restrict the movement in public places of unvaccinated people, she's not convinced expanding the passport system will change their minds.

While the number of first-dose appointments has increased significantly in Quebec over the past few days, Lavoie said she doesn't think it's related to the expansion of the vaccine passport to cannabis and liquor stores. More than 50 per cent of those new appointments were among children five to 11, she said.