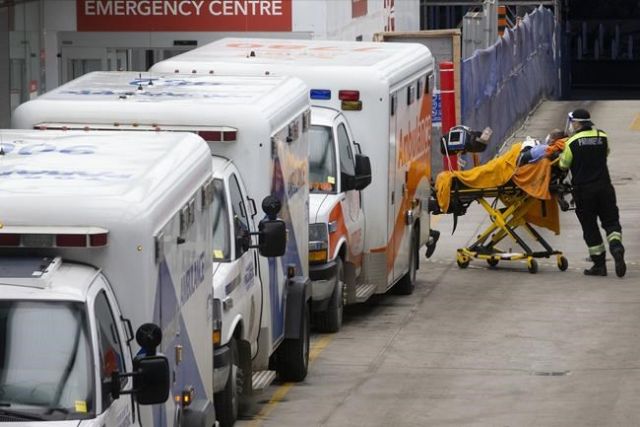 COVID-19 cases are threatening to overwhelm hospitals in several parts of Canada, with hospitalizations nearing or reaching record highs in Quebec, Ontario, and New Brunswick.

But he says Canada will pursue lockdowns and restrictions sooner than places such as the United States because Canada has a lower tolerance for deaths from the virus.

Meanwhile, students in British Columbia and Alberta are back in their classrooms this morning after an extended winter break.

Many provinces imposed a weeklong delay in the return to in-person schooling as the Omicron variant spread rapidly across the country.

But officials in the two westernmost provinces have argued that virtual learning presents its own risks to kids, saying it jeopardizes their mental health.

Even so, some kids, parents and education workers have expressed concerns about reopening schools while the virus puts pressure on health-care systems across the country

Alberta Education Minister Adriana LaGrange has promised thousands of test kits will be delivered to students and parents in that province over the next few days.

However, Edmonton Public Schools and the Alberta Teachers' Association have said there are still kids who won't get them until days after they return to classes, which could further exacerbate the lightning spread of Omicron cases.

In Quebec, those aged 40 and over can now book appointments for a third dose of a COVID-19 vaccine — a day after the province set an all-time high of 2,436 hospitalizations linked to coronavirus infections.

Also starting immediately, staff at National Microbiology Laboratory facilities across the country are being asked to work from home if possible.

A statement from the Public Health Agency of Canada says the move is aimed at protecting essential workers doing critical on-site diagnostic and lab research.

The work from home order covers staff at the lab sites in Winnipeg, Guelph, Ont., Saint-Hyacinthe, Que. and Lethbridge, Alta.