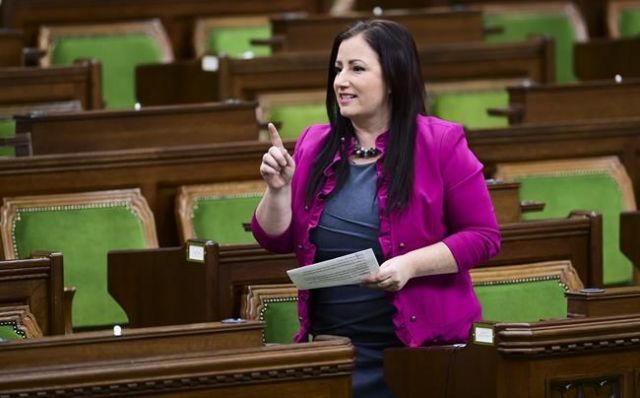 Conservative Leader Erin O'Toole has asked the House of Commons to probe allegations that one of his MPs, Shannon Stubbs, created a toxic work environment for her staff.

But the move has prompted other Conservatives, including those who want O'Toole ousted as leader, to come to the defence of the Alberta MP, who had called for a review of his leadership following the party's election loss in September.

O'Toole said Monday he learned of the allegations, first reported by the Globe and Mail, last week while touring in Quebec. The Canadian Press has confirmed one allegation in the report, that some of Stubbs' employees felt pressured to paint a room in her house.

Stubbs' office did not immediately respond to a request for comment, but she told the Globe the house-painting was a gift. She denied any wrongdoing, saying she felt targeted for calling for a review of O'Toole's leadership.

David Parker, a former staffer who worked in Stubbs' office for almost a year beginning in 2016, told The Canadian Press it was clear that for the MP, "nothing was good enough, ever."

Three other former staff members, who spoke to The Canadian Press on the condition of anonymity because they feared reprisals, alleged that Stubbs would openly criticize colleagues in the office, send texts overnight and make belittling comments.

The Canadian Press has not reviewed those alleged communications.

O'Toole said Monday he asked the House of Commons to look into the matter because the allegations are of a serious nature, and he expects his MPs to behave professionally.

"As I've been leader for a year, I've set an expectation on all my MPs that we will have a professional and respectful workplace environment," he said in response to the allegations.

Others, however, came to Stubbs' defence.

Gregory Loerts, who currently works in her office, tweeted Monday that Stubbs is "wonderful to know personally."

"The work has been challenging, but extremely rewarding."

Jordan Paquet, a former staffer who worked in Stubbs' office for four months beginning in October 2020, told The Canadian Press he had a positive experience. While it was a busy, he said, the pair got along well and that Stubbs displayed a passion for her work, behaved respectfully and would offer feedback that was constructive.

Stubbs has so far been the lone Conservative MP to publicly call for O'Toole's performance to be reviewed by party members within six months.

Outside their first post-election caucus meeting in October, Stubbs said O'Toole flip-flopped on some key Conservative policy positions and that the grassroots deserved to have a say if the leader intended on making more changes to the party.

Alissa Golob, co-founder of anti-abortion organization RightNow, which has been fiercely critical of O'Toole walking back promises he made to protect the conscience rights of health-care professionals, tweeted Monday that the leader was embarking on a "witch hunt."