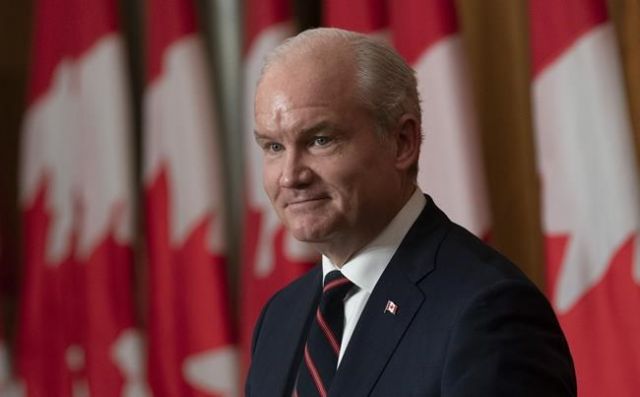 Photo: The Canadian Press
Conservative Leader and leader of the official opposition Erin O'Toole listens to a question from a reporter during a news conference following caucus in Ottawa, Tuesday, Oct. 5, 2021. THE CANADIAN PRESS/Adrian Wyld

Conservative Leader Erin O'Toole's latest position on conscience rights appears to be offside with at least one elected member from his party's socially conservative wing, as it prepares to study its election loss and enter a new Parliament.

Conscience rights mean the ability of doctors or nurses to not have to perform a procedure they morally object to, such as medical assistance in dying or abortion.

Social conservatives champion the measure as a way to stop health-care providers from having to refer patients elsewhere to access such services, as is currently the rule in provinces like British Columbia and Ontario for medically assisted death.

O'Toole explicitly vowed during last year's leadership race to offer legislative protections to prevent health professionals from having to make referrals, as he courted the well-mobilized social conservative voting base.

He backtracked on that during the campaign, saying referrals were necessary because people have a right to access medical services, once asked to clarify his position and in the face of political attacks from the Liberals.

In a Sunday piece in The Post Millennial titled, "Conservatives stand up for the conscience rights of all Canadians," Genuis writes a referral is more than providing directions or transferring a patient, but amounts to an "endorsement" for a particular course of care, which he says a person who objects to a service can't provide.

"The opponents of conscience rights have generally contended that allowing individuals to opt out of providing something means that others will not be able to access it," he also writes.

"On the basis of this logic, opponents of conscience rights might also ask if we should permit the existence of vegetarian restaurants … what if someone shows up at a restaurant, unaware that it is vegetarian, and cannot get the food they are looking for?"

Genuis shared the article on his Facebook page Wednesday, saying he would be sure to keep defending conscience rights.

Genuis was among the re-elected MPs who voiced support for O'Toole staying on as leader following the Conservatives’ election defeat Sept. 20.

Their caucus opted this week to give itself the power to review and oust O'Toole as leader if at least 20 per cent of MPs put pen to paper and request a secret ballot vote — a measure O'Toole himself said he supported because it offers transparency.

There is also pressure brewing from some in the party's grassroots to move up the date for when members can have their own leadership review. These members are unhappy with O’Toole appearing to flip-flop on conscience rights, introducing a carbon price after campaigning to axe the Liberal policy and watering down a promise to repeal a ban on “assault-style” guns.

A leadership review is currently set for 2023 when the party is scheduled to have its next convention. But Alberta MP Shannon Stubbs believes one should happen within six months, especially if O'Toole is planning to change policies central to the party's values.

Leading up to the campaign and during the race itself, O'Toole tried to pitch the Conservatives as a more moderate party when it comes to social issues like abortion, LGBTQ rights, climate change as well as spending, saying it aimed to eliminate the deficit within a decade.

Speaking after Tuesday's caucus meeting, O'Toole signalled suburban and urban seats are where Conservatives would continue to focus.