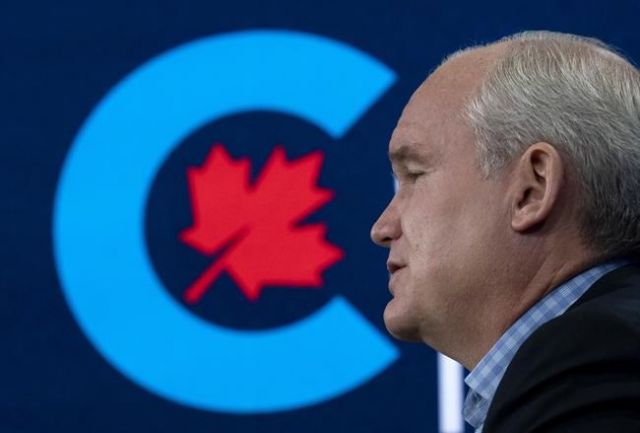 The Conservative Party of Canada is not saying if an Erin O'Toole-led government would keep measures supported by the two other main parties that would increase scrutiny of open-pit coal mine proposals in Alberta's Rocky Mountains.

"(The Conservative platform) ensures that we will meet our environmental and climate targets while ensuring we get Canadians back to work in every region and in every sector," said an email from party spokesman Mathew Clancy.

He was responding to questions from The Canadian Press about whether victorious Conservatives would keep measures announced under the previous Liberal government on coal mining — a hot topic in Alberta.

Those measures include promises of federal involvement in future environmental assessments of such projects and a warning that new thermal coal mines don't fit with Canada's climate-change goals. The Liberals flatly turned down one such proposal — Riversdale Resources’ Grassy Mountain mine — saying it would cause unacceptable environmental impacts.

A spokesman for the New Democrats said his party supports those positions.

Clancy's response for the Conservatives doesn't address them. The words "coal" or "mining" also do not appear.

"We have a detailed plan to show leadership on environmental, social and governance (issues) and we support an assessment process that upholds best-in-class environmental standards and sets clear expectations and timelines for environmental reviews," he wrote.

Alberta has been riven by the possibility of more coal mines in its beloved mountains and foothills since its United Conservative government revoked a 1976 policy that protected them. Those landscapes are favourite recreation destinations, as well as the source of most of the province's drinking water.

A public outcry against coal mines forced the province to restore protections and strike a committee to hear from Albertans before making further moves.

The federal Conservative response does nothing to address those deeply held concerns, said Craig Snodgrass, mayor of High River, a foothills community that has opposed mining.

"There's zero comfort in that statement," he said. "When you make a statement like that, and you make it that grey and you won't take a stance on this stuff, we know exactly what you're up to."

The statement suggests that a Conservative government would be reluctant to use federal powers for environmental protection, said University of Calgary law professor Martin Olszynski.

"It's very clear that the Conservatives would essentially leave the issue to the province," he said. "Federal government involvement in mining has been an additional safeguard and has provided Canadians and Albertans with that additional security."

Bobbi Lambright, spokeswoman for a foothills landowners group, said her organization sees federal involvement in coal mine assessment as a way to ensure projects are thoroughly evaluated.

"Our membership very much wants assurance that the gains that have been made with respect to protecting the eastern slopes (of the Rockies) are not lost as a result of the federal election," she said.

She criticized the Conservative response to the questions on coal mining.

"These are exactly the questions that many people in Alberta want answered," she said. "They didn't answer them."

The Canadian Press also reached out to John Barlow, the Conservative candidate for the Foothills riding, which covers much of the area that has been leased for coal exploration. He did not respond.

Snodgrass said Ottawa has a legitimate role in environmental issues and that any party that wants to govern should lay out how it would exercise it.

"They say it's a provincial issue, but we all know it's not. We all know these projects land in the hand of the federal government.

"The Conservative Party of Canada wanting to be the government but not taking a stand on (this issue) has red flags flying all over the place."