Tories promise new parents on leave could earn up to $1,000 without losing EI benefit 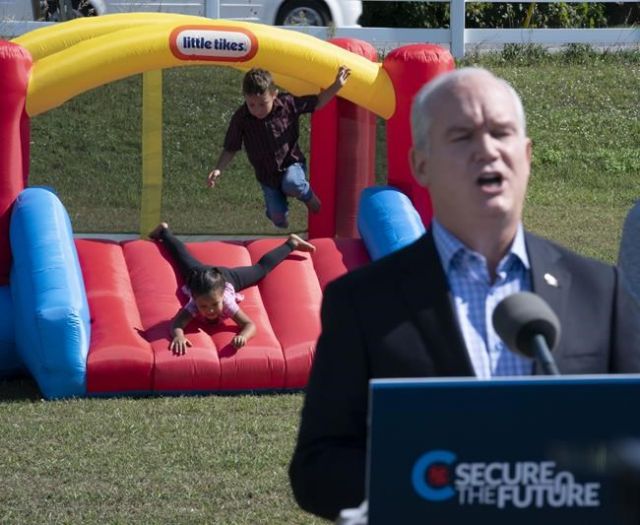 The federal Conservatives promised Monday to let new parents earn up to $1,000 each month without it affecting their maternity or parental leave payments.

The pledge builds on Conservative Leader Erin O'Toole's pitch to female voters a day earlier, when he promised to boost support for parents following a miscarriage — part of a "compassionate conservatism" he has been extolling ahead of the federal election on Sept. 20.

Many lower-income Canadians can't afford the reduced pay offered by the current federal maternity and parental benefits system, O’Toole told reporters Monday at a field in a rural Ottawa suburb. Employment insurance currently allows parents to receive up to 55 per cent of their earnings, to a maximum of $595 per week.

O'Toole promised to "make our EI system more compassionate" and said new parents would be able to supplement those payments with extra earnings from remote or part-time work. Mothers and fathers could earn $1,000 per month without it affecting their payments, after which each dollar earned would result in a 50-cent reduction in EI benefits — something that happens after the first dollar earned under the current program.

"What we want to see is our EI system modernized and more flexible to meet the needs of Canadians, particularly women that want to keep a foot in the workforce with respect to maternity and other decisions," O'Toole said, as children leaped on a bouncy castle behind him while parents stood watch.

He also promised to expand the Canada Child Benefit to start at the seventh month of pregnancy instead of at childbirth.

Lindsay Tedds, an associate professor of economics at the University of Calgary, said O'Toole's "heart's in the right place," but parties need to push toward a more substantial overhaul to parental benefits.

"Our EI system lacks a significant amount of flexibility — earning income on EI certainly being one of them," Tedds said.

She suggested a system based on hours rather than weeks to ease the return to work or better accommodate reduced work during late pregnancy and after a child is born.

"When you have an hours-based system, it means that you can return to work part-time while also getting your leave, so that this becomes a much more gradual adjustment from being on those benefits versus returning into the workforce," she said.

The Conservatives have said the biggest beneficiary of their proposal would be low-income mothers who earn about $30,000 annually and struggle further under EI payments of about $1,375 per month during their leave.

"They can only go on EI for a few months before they deplete their savings and have to go back to work full-time and lose EI or get 50 per cent of it clawed back," said Conservative Party spokesman Mathew Clancy.

The measure would have a "negligible impact" on EI premiums, he added.

Liberal Leader Justin Trudeau, who O'Toole accused of having "not talked about any policy or anything to build a better country that works better for families," introduced an added parental benefit in March 2019. The change gives an extra five weeks of EI benefits to families when both parents in a two-parent household take time off with their new child.

O'Toole spoke briefly with the half-dozen parents on hand with their children following his announcement in Carp. As a baby snoozed in its mothers arms, he asked: "Did my speech do that to you?"