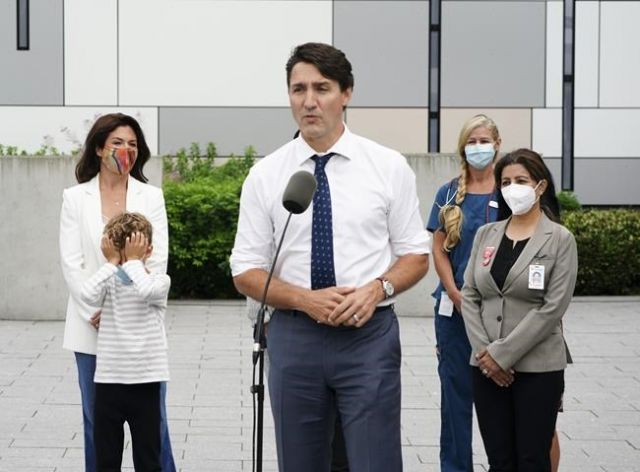 Photo: The Canadian Press
Liberal Leader Justin Trudeau answers questions as his son Hadrien and wife Sophie Grégoire Trudeau, left, and BC Nurses, right, stand to his side at a campaign stop in Vancouver, B.C., on Monday, Sept. 13, 2021. THE CANADIAN PRESS/Sean Kilpatrick

Both Liberal Leader Justin Trudeau and Conservative Leader Erin O'Toole are striking decidedly negative tones as the last week of the campaign kicks off, but Trudeau says the difference is he isn't getting personal.

Both leaders spent considerable time at their campaign stops Monday criticizing the other, but Trudeau suggested it's not comparable.

"But there is a difference between the kinds of personal attacks that Mr. O'Toole has been engaged in since he became leader and that we’re seeing right now, and the clear differences of perspective and policy that I’ve been highlighting from the very beginning."

Earlier, O'Toole said Trudeau has veered into "personal attacks and American-style misleading politics," adding that the Liberal leader was only serving his own political interests by calling the Sept. 20 election.

"When Mr. Trudeau was partying — and we’ve all seen the photos — I was doing search-and-rescue missions in the military," O'Toole said in Ottawa.

"Every Canadian has met a Justin Trudeau in their lives — privileged, entitled and always looking out for No. 1."

Polls suggest a tight race between the Liberals and Conservatives to form the next government, informing the parties' strategies for the last week of the campaign.

Trudeau insisted he is not impugning O'Toole's character, and went on to say the Conservative leader has "proxies" in the anti-vaxxer movement, the gun lobby and anti-abortion groups.

When asked for evidence that O'Toole has anti-vaccine proxies, Trudeau provided nothing concrete.

He said volunteers for a local Conservative campaign were among a crowd in one of the early protests, though he acknowledged the Conservatives repudiated them and kicked them off their campaign after their involvement came to light.

But, Trudeau said, one has to ask why O'Toole won't mandate vaccines for his candidates when a majority of Canadians are supportive of vaccines and when the Tory leader requires reporters and staff travelling with him on the campaign to be vaccinated.

"You have to know there is an awful lot of pressure from inside his party to do that, to leave room for that," he said.

Finally, Trudeau pointed to O'Toole saying the Conservatives are a "big tent" party when the Tory leader was questioned about People's Party of Canada sympathizers, some of whom have been at Trudeau protests carrying PPC signs.

"(That means) there is room in his Conservative party for anti-vaxxers, for gun lobbyists, for anti-choice activists," Trudeau said. "That’s the big tent that he is casting, to include people who find themselves outside the fringes of the mainstream."