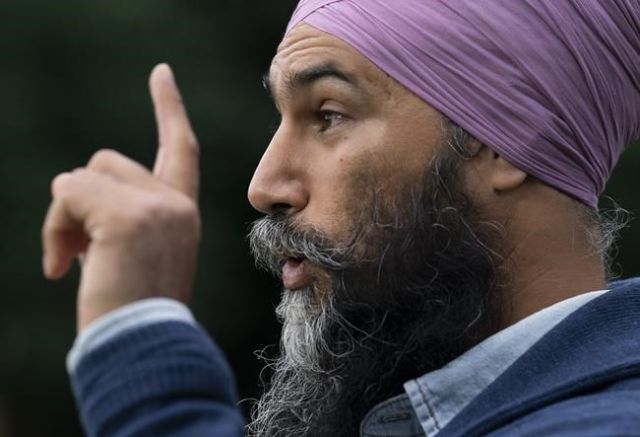 Jagmeet Singh put a price tag on his election promises Saturday, saying the $214 billion needed to realize the New Democrats' vision for Canada would come largely through tax hikes for the country's wealthiest residents and businesses.

Singh positioned the NDP as the only party with a plan to help make life more affordable for everyday people while ensuring the most affluent pay their dues.

"There was a time when the super wealthy paid more of their fair share," the party leader said. "That's what we want to return to, that the burden should not be shouldered by the middle class, by working people. It should be those at the very, very top."

The NDP's commitments add up to $214 billion over five years, with $166 billion in projected revenues based on estimates from the Parliamentary Budget Office.

Health care is the most costly area of the New Democrats' platform, with proposed spending totalling $68 billion. The platform outlines how that money would be allocated to pay for the NDP's universal pharmacare plan, dental and mental health coverage for those who need it and for ending private, for-profit long-term care.

Other big-ticket items include spending $26 billion on various initiatives to fight climate change and supporting energy-sector workers in the transition, as well as $30 billion earmarked over five years for reconciliation with Indigenous Peoples.

The platform shows $15 billion, half of the money set aside for reconciliation, would be spent on complying with a previous Human Rights Tribunal ruling that found the child-welfare system discriminated against First Nations children.

The NDP projects its proposed wealth tax, returning the capital gains inclusion rate to its 2000 level, returning the corporate income tax rate to 2010 levels except for small businesses, cracking down on tax havens and taxing excess profits made during the pandemic would raise more than $150 billion in revenue over five years.

While some companies have made record profits during the pandemic, everyday people and small businesses have struggled, Singh said.

He cited Amazon as an example of a company that should be subject to higher taxes for pandemic profits.

"I would think it makes sense that if someone made money off of the pandemic, then they've got a responsibility, morally, to contribute a bit more," he said.

The New Democrats' proposed annual tax of one per cent on Canadians with net wealth of $10 million or higher would generate $60 million in revenue by 2025-26, according to an estimate released by the Parliamentary Budget Office.

Additional revenue would come from NDP proposals including a 20 per cent foreign home buyers' tax and eliminating certain subsidies for the oil and gas sector.

The platform also outlines how Canada's debt as a share of GDP would decline to 45.8 per cent from 48 per cent over the next five years under an NDP government, a slightly lower ratio than the Liberals' 46.5 per cent projected for 2025-26.

In costed platforms released earlier this month, the Conservatives pledged $58 billion over the next five years and the Liberals outlined $78 billion in new spending.

The Liberals said Saturday that the NDP platform "doesn't get the job done."

Mona Fortier, the Liberal candidate for Ottawa-Vanier, said the NDP climate change plan falls flat and doesn't offer any spending to get guns off the streets.

She also criticized the timing of the release.

"Today, after thousands of Canadians have already voted, Jagmeet Singh and the NDP finally released the costing of their commitments," she said in a written statement.

Asked about why the NDP was releasing its costed platform just nine days before the election, Singh said it takes time to work with the Parliamentary Budget Office on estimates and their plans wouldn't come as a surprise for Canadians.

"We said clearly we're going to make the billionaires pay their fair share and we've been really clear about investing in the programs that people need," he said. "This document is exactly what we've been saying all along, with more details."