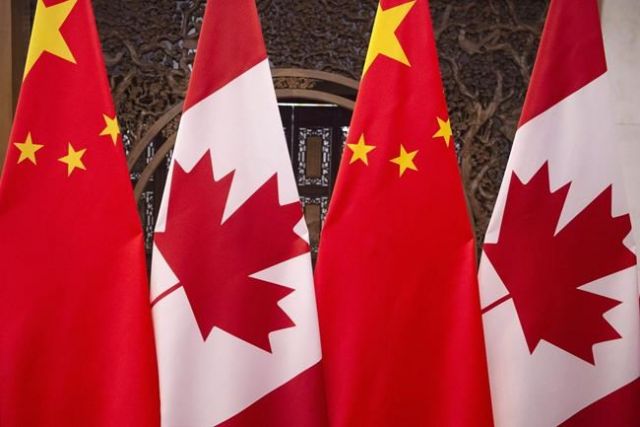 Photo: The Canadian Press
Flags of Canada and China are shown prior to a meeting of Canadian Prime Minister Justin Trudeau and Chinese President Xi Jinping at the Diaoyutai State Guesthouse in Beijing on Dec. 5, 2017. The Liberal government has directed a state-owned Chinese telecommunications firm to divest its stake in a Canadian subsidiary over national security concerns, prompting a court challenge of the order.

The Liberal government has directed a state-owned Chinese telecommunications firm to divest its stake in a Canadian subsidiary over national security concerns, prompting a court challenge of the order.

China Mobile International Canada is asking the Federal Court to set aside the recent decision, saying the government has no grounds to believe the company would compromise security or engage in espionage on behalf of Beijing.

CMI Canada says the Trudeau government was motivated, at least in part, by "the current political socioeconomic climate and the general biases against Chinese state-owned companies."

The case unfolds amid high tensions between Ottawa and Beijing over China's prolonged detention of Canadian citizens Michael Kovrig and Michael Spavor for alleged spying.

China's actions against Spavor and Kovrig are widely seen in the West as retaliation for the late 2018 arrest by Canadian authorities of Meng Wanzhou, an executive with Chinese firm Huawei Technologies, so she can be extradited to the U.S. to face fraud charges.

CMI Canada's application filed this week in Federal Court reveals details of an investment screening case that has quietly unfolded outside the public eye over the last year.

The company, established in 2015, provides mobile communication services, including prepaid call plans, but does not itself own or operate any telecommunications network facilities. Instead, it has partnered with Telus Communications Inc. for provision of wireless services through the Telus network.

CMI Canada says it inadvertently neglected to inform the federal government of its presence as a new Canadian business until October of last year. A series of requests for information from federal officials soon followed.

The Investment Canada Act and the National Security Review of Investments Regulations allow the federal government to scrutinize an investment in Canada by a foreign enterprise.

In January, the government informed CMI Canada of a review on security grounds, saying the investment could result in the Canadian business being leveraged by the Chinese state "for non-commercial purposes, such as the compromise of critical infrastructure and foreign interference, to the detriment of Canada’s national security."

Following additional information exchanges, the government issued an Aug. 9 order directing China Mobile to either divest itself entirely of or wind up the Canadian business within 90 days.

CMI Canada contends the conclusion was "tantamount to speculation about what the Canadian business may do," such as using its supposed access to sensitive information for "military applications or espionage."

The company argues Ottawa could not reasonably have concluded, based on the information available, that the investment would be harmful to Canada's national security.

It says the company does not own nor operate any transmission facilities in Canada, lacks privileged or direct access to any critical infrastructure, and does not have access to any sensitive telecommunications data or personal information, other than basic contact details.

CMI Canada is asking the court to quash the federal decision or, in the alternative, to send the matter back to the government for reconsideration. It also wants the order put on hold pending outcome of the case and any appeals.

If the decision is not stayed, the company will be forced to leave "the Canadian landscape entirely. This would require the termination of its client base and operations," the application says.

The federal government has not yet filed a response and no date has been set for a hearing.