Forest company, RCMP, old-growth defenders due in court this month for four hearings 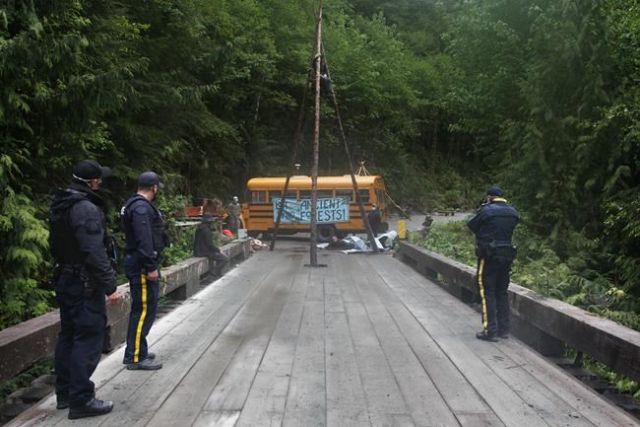 Photo: The Canadian Press
RCMP officers assess the situation at an anti-logging protest in Caycuse, B.C., on Tuesday, May 18, 2021. The ongoing battle over old-growth forests on southern Vancouver Island is heading back to court where a forest company will seek to extend an injunction order and the RCMP and protesters will face off over police powers.THE CANADIAN PRESS/Jen Osborne

The ongoing battle over old-growth forests on southern Vancouver Island is heading back to court where a forest company will seek to extend an injunction order and the RCMP and protesters will face off over police powers.

British Columbia Supreme Court is scheduled to hear four civil applications in Nanaimo connected to the yearlong dispute over logging in the Fairy Creek area, located north of Port Renfrew.

More than 800 people have been arrested in the area since May after Teal Jones Cedar Products Ltd. was granted an injunction prohibiting blockades at entry points to an area where it is harvesting trees.

The court's decision on the applications, which are set to be heard Sept. 14 to 17, could change the nature of the dispute, Victoria lawyer Matthew Nefstead said Friday.

"If the injunction expires and isn't renewed, then obviously that completely changes the landscape in terms of the interface between police and protesters and loggers," said Nefstead, who is representing several members of a group opposed to old-growth logging known as the Rainforest Flying Squad.

None of the statements made in the applications have been tested in court.

Teal Cedar Products says in court documents it is seeking to have the injunction order extended by one year to Sept. 26, 2022, because without the court order and the presence of the RCMP, protesters will impede forestry operations that are worth $32 million to the B.C.-based company.

"Unfortunately, and despite the RCMP's considerable efforts, the blockades are ongoing," say the documents. "In the absence of an injunction and enforcement by the RCMP anarchy will reign ... a situation which cannot be tolerated in a society governed by the rule of law."

A spokesperson for the company could not be immediately reached for comment.

The RCMP, in an application filed by the Attorney General of Canada, says it is asking the court to vary its injunction order to allow the Mounties to limit traffic and conduct searches in enforcement areas because of increased challenges from protesters.

The RCMP says it wants the order changed to allow officers to conduct searches of people and deny entry to those considered in breach of the injunction or refusing to be searched.

"Protesters have: buried themselves under boulders and rotting logs, suspended themselves on tripods with nooses around their necks, surrounded and trapped police officers on logging roads, disabled heavy equipment used to safely defeat obstacles and destroyed roads such that they risk collapsing," the police application asserts.

Sgt. Chris Manseau said in a statement the RCMP is preparing for the hearings and will reserve its comments for the court.

"However, we can once again confirm that all of our actions since enforcement began on May 17, 2021 are well documented, including the use of body worn cameras and we are prepared to disclose same during upcoming criminal proceedings for those arrested, any complaint process and should it be necessary, any legal applications," said Manseau.

Nefstead said another application filed by three members of the Rainforest Flying Squad asks the court to declare as unlawful RCMP exclusion zones that were established on July 20 and Aug. 21.