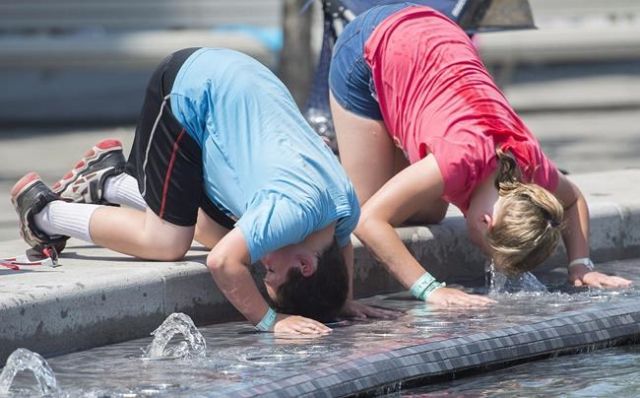 Photo: The Canadian Press
A boy and girl dunk their heads in a water fountain during a heat wave in Montreal.

Researchers in Quebec have developed a new warning system for heat waves they say is more precise and adapted to climate change.

Quebec has had a heat-alert system since 2010, but researchers are modifying that plan because they estimate that periods of extreme heat will extend beyond the summer months.

The new alert system will be tested soon and is designed to help public health officials take decisions to avoid deaths and hospitalizations, as extreme heat waves become more frequent and increase in intensity.

The system is the result of work by researchers from the province's national institute for scientific research as well as the national public health institute.

Under the new system, alerts will be triggered when a specific heat threshold is reached, depending on the month and the expected duration of the hot weather.

The alert system will permit authorities to prepare hospital capacity ahead of an expected influx of patients and to notify people about places of refuge to cool down.