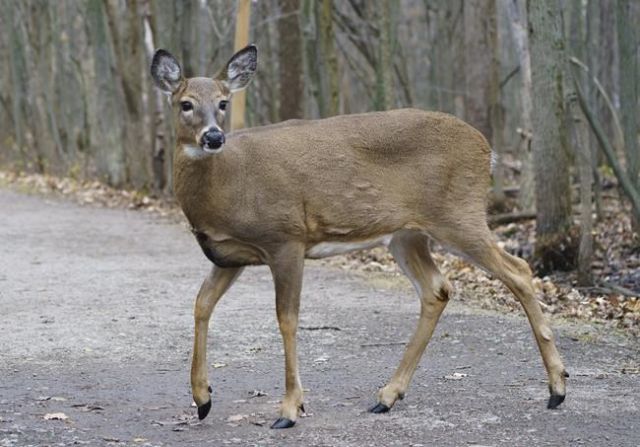 The continuing spread of a fatal wildlife disease in Alberta and Saskatchewan has a federal agency recommending a deer cull across a wide swath of the Prairies.

And soon-to-be-published research on chronic wasting disease has raised new fears about whether the illness could infect humans.

"I would say this question was answered with 'yes,'" said Hermann Schaetzl, a veterinary scientist at the University of Calgary.

Schaetzl's work was discussed in a recent report from the Canadian Agri-Food Policy Institute, which advises the federal government on agriculture policy. Earlier this month, the institute concluded that in addition to human health concerns, the disease's spread over the last decade threatens Western Canada's agriculture, wildlife and food security.

"It's continuing to increase in its spread and the speed of its spread," said Ted Bilyea, the institute's strategy officer.

Chronic wasting disease affects animals such as deer, caribou, moose and elk, attacking nervous systems with universally fatal results. Like mad cow disease or Creutzfeldt-Jakob disease in humans, it is caused by prions — misshapen proteins that can persist in the environment for up to a decade, able to transfer their shape to healthy proteins.

It was first found in Canada in 1996. Since then, it has appeared in deer and elk in Saskatchewan, Alberta and Quebec.

In 2019, Alberta found 11 per cent of animals submitted by hunters tested positive, up from seven per cent in previous years. It was also found in moose for the first time.

Maps in the report show that in 2008 the disease was limited to isolated outbreaks in Alberta and Saskatchewan. Now, it's considered well-established throughout Alberta's southeast quarter and Saskatchewan's southern half.

In 2006, German scientists began feeding macaques with meat from animals infected with the disease. Because it can take years for the disease to show, the monkeys weren't euthanized and tested until two years ago.

The first tests were ambiguous. But Schaetzl, who helped conduct confirmatory tests, said it became clear the monkeys had developed low-level infections.

"The more we did, the more we could confirm the macaques were infected."

Although Schaetzl's work is still being peer-reviewed, it has been presented in conferences and is widely discussed among disease experts.

"I was shocked when we first learned of the results," said Neil Cashman, a leading prion expert at the University of British Columbia. "It's absolutely confirmative that this happened — you could give macaques a prion disease through oral consumption of contaminated meat."

Because the disease is so new and takes so long to develop, Cashman said there could already be people suffering from a human form of chronic wasting disease.

"(For) many people with a spinal cord syndrome, it wouldn't even occur to the treating neurologist that this could be a prion disease," he said. "It's going to take some education and alertness to even think of the diagnosis."

To keep tainted meat out of the food supply, Saskatchewan and Alberta require deer and elk farmers to test every animal that dies on their farms, including slaughtered animals. If the disease is found on an Alberta farm, the herd is depopulated and the farmer is prohibited from restocking with animals susceptible to it.

There have been no cases of cattle catching the disease from wild animals.

"It's easy to go down a doomsday scenario but I don't think we're there yet," said Neil Lehman, Alberta's provincial veterinarian. "I think it's low-risk."

He points out macaques may be close to humans, but they're still a different species.

It also threatens hunters — especially those who depend on game to fill the freezer. The report warns of dire consequences if the disease gets into caribou, a threatened species in the mountains and a staple for many northern First Nations.

"The southern range (of caribou) is pretty much the northern range for our survey," Bilyea said. "If (prions) pass through that, then we have a genuine food security problem for our northern people."

The report's first recommendation is the creation of a deer-depopulated buffer zone to separate caribou range from infected animals.

Alberta has previously tried deer culls in an effort to keep the disease confined to Saskatchewan. But Lehman said it might be time to try again.