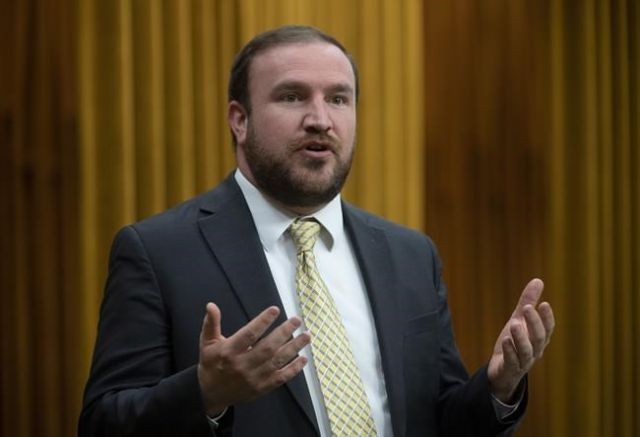 Eric Duncan has spoken more about his sexuality in the past two years than he says he has in his entire 33.

The Conservative member of Parliament has talked openly in the House of Commons about being gay while pushing the Liberal government to fulfil a two-time campaign pledge to end the ban on blood donations from men who have sex with other men.

This session of Parliament has taken on a highly partisan atmosphere that Prime Minister Justin Trudeau has recently described as toxic, intensifying speculation that Canadian voters may head to the polls before MPs return from the summer break.

In a recent interview with The Canadian Press, though, Duncan described being able to shine a light on an issue that affects him deeply, with some encouragement from a caucus colleague, as an example of how Parliament can work.

Canada introduced a lifetime ban for gay men in 1992 and in 2013 changed it so blood would be accepted from a man who abstained from sex with another man for at least five years.

The waiting period then dropped to one year, and became three months in 2019.

That year, Duncan became a rookie MP — the first openly gay man to be elected under the Conservative Party of Canada banner.

Duncan is not the first MP who has called for an end to the ban, but he did so in a particularly personal way last November. He repeatedly pressed Health Minister Patty Hajdu at a committee hearing in the House of Commons on whether she would accept his blood, which he said he couldn't donate despite the need created by the COVID-19 pandemic.

Hajdu agreed the policy was discriminatory, but ultimately under the control of the independent Canadian Blood Services and Hema-Quebec.

Duncan said afterwards a few Liberal MPs thanked him for raising it.

He credits the idea to do so coming from the person who sat behind him: longtime Conservative MP and health critic Michelle Rempel Garner.

Improving equality for those in the LGBTQ community is something Rempel Garner says she has long worked to do.

"I said to Eric, would you be willing to push (Hajdu) on this? Because I know you feel passionately about it. Would you push her on it and push her hard, like, and I'm talking about asking her if she would take your blood," she said.

Duncan says initially he didn't feel confident, being he was a newbie MP set to go toe-to-toe with a senior cabinet minister. He says he also wasn't sure he wanted to share his personal story.

Rempel Garner said the fact he did took courage.

Duncan laughs and says he owes her a drink or two.

"To be able to go out and share a story, share a life experience and try to affect change, it's why we all go there," he said. "There's more to me than being a gay man. But it's an important part of who I am."

Recently, Canadian Blood Services said that by the end of 2021, it would recommend to Health Canada that it remove the waiting period and bring in screening for all donors based on sexual behaviour.

Duncan finds it unacceptable a review could mean the ban stays in place for another year or two, but can see the situation through a "glass half full" because of the renewed spotlight on it.

"It shows how Parliament still has such a useful function where a small town guy from rural eastern Ontario can stand up and we can successfully get an issue on the national radar."

Things didn't go as well when it came to government legislation banning conversion therapy, which divided the Conservative caucus.

The government seeks to criminalize the widely discredited practice of attempting to alter a person's sexual orientation or gender identity.

The proposed legislation, known as Bill C-6, passed the House of Commons with 62 out of 119 Conservative MPs opposed. Most of them are from Western Canada, home to many of the party's social conservatives.

Liberal MPs quickly condemned the split as proof the party fails to stand up for LGBTQ rights.

After the vote, the Conservative party promised to legislate a conversion therapy ban of its own should the government's fail to pass, reflecting leader Erin O'Toole's efforts to broaden support for a party that has seen its record on such issues be a source of political attacks.

Some of his MPs who voted against Bill C-6 released statements, insisting they oppose the coercive practice, but had a problem with how it was defined.

They argued the bill was worded too broadly and threatened parents' and faith leaders' ability to speak freely to children about sex and gender, which the government dismissed as a distraction.

Duncan supported Bill C-6 and said some colleagues asked him questions about it. When it comes to how caucus voted, he thinks some "common sense work" with amendments could have helped bridge the divide, which is how O'Toole defended it.

"At a higher level, I think there was an opportunity for the better side of Parliament to show itself."

It is now unclear whether the bill will become law, given the Senate adjourned for summer without having passed it and Parliament could dissolve for an election.

Liberals again blame Conservatives for the bill hitting a roadblock.

Conservative Sen. Leo Housakos argued that Trudeau had six years to bring forward such a ban, which needs time to be scrutinized because it would change the Criminal Code.

The Liberals introduced an earlier version of the bill in March 2020, but it died on the order paper when Trudeau prorogued Parliament last summer. The Liberals reintroduced it in October.

"They brought this legislation in so late, that they knew damn well there was no time to get it through Parliament," Housakos said.