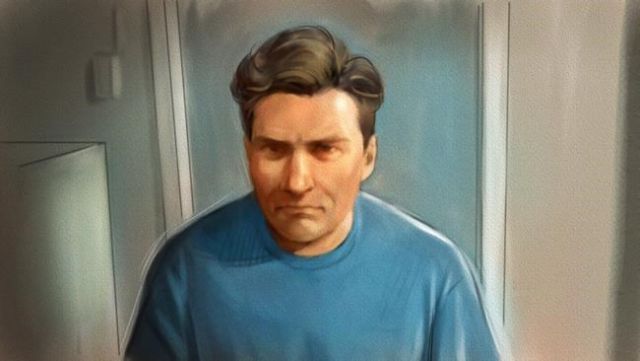 Photo: The Canadian Press
Paul Bernardo is shown in this courtroom sketch during Ontario court proceedings via video link in Napanee, Ont.

Two officers with the Parole Board of Canada took about an hour to reject his release application.

Their decision came after Bernardo said he was a changed person who now has his sexual deviancy under control.

The board also heard from the parents of two teens he tortured and killed in the early 1990s.

They argued against his ever leaving prison, calling him a sadistic psychopath.

Bernardo is serving a life sentence for first-degree murder and other offences.

Relatives of two teens raped, tortured and killed by Paul Bernardo recounted the enduring pain of his crimes at his second parole hearing on Tuesday as they warned he should never be released from his life sentence.

In impassioned victim-impact statements, the parents of Kristen French and Leslie Mahaffy branded Bernardo as an incurable, sadistic psychopath who, despite decades behind bars, still poses a formidable threat to public safety.

A persistent and "evil dark cloud" continues to haunt their family, Donna and Doug French told the parole hearing.

"For those who say time heals, they don't know the excruciating pain that comes from such a horrific loss," they said. "Time doesn't heal the pain; the pain is a life sentence."

Similarly, Debbie Mahaffy talked of the pain of having to face another hearing in which Bernardo was making a bid for freedom less than three years after his previous failed attempt.

"Once again, Bernardo's desires are inflicted on us as he inserts himself into our lives again, forcing his horrors and terrifying memories upon us," Mahaffy said in a statement read by lawyer Tim Danson. "What does resting in peace mean when you have to relive these horrors every two or so years for the rest of our lives?"

Bernardo has been serving a life sentence for kidnapping, torturing and killing Kristen French, 15, and Leslie Mahaffy, 14, in the early 1990s near St. Catharines, Ont. Now 56, he became eligible for parole more than three years ago but was denied release in October 2018 after the hearing officers deliberated for about 30 minutes.

The families argued his right to a hearing before the Parole Board of Canada every two years is unconscionable. They said it should be every five years at least.

"It seems that just as the ink has dried on our previous victim impact statement, Doug and I have to muster up the strength to prepare a second statement," Donna French said. "This is a painful and difficult process.

Bernardo’s crimes over several years in the late 1980s and early 1990s, some of which he videotaped, sparked widespread terror and revulsion.

Among his brutal acts, he and his then-wife Karla Homolka kidnapped, tortured and killed Mahaffy, of Burlington, Ont., in June 1991 at their home in Port Dalhousie, Ont., before dismembering her body, encasing her remains in cement and dumping them in a nearby lake.

They similarly kidnapped and killed Kristen French in April 1992 after ignoring her agonized entreaties over three days.

Dubbed the “Scarborough Rapist,” Bernardo was convicted in 1995 of first-degree murder, kidnapping and aggravated sexual assault among other offences. Most of his almost three decades in prison have been in solitary.

Both families argued the designated dangerous offender should never be released. Nothing has changed with Bernardo, who will surely commit new egregious crimes against innocent children if ever allowed to leave prison, they said.

"There is no known cure for sadistic psychopathy," Debbie Mahaffy said.

Bernardo ultimately admitted raping 14 other women. He was also convicted of manslaughter in the December 1990 death of Homolka’s younger sister, Tammy. The 15-year-old girl died after the pair drugged and sexually assaulted her.

Homolka pleaded guilty to manslaughter and served her 12-year prison sentence before being released in 2005. She went on to remarry and become a mother.

The French and Mahaffy families have also challenged in court their lack of access to reports or other evidence Bernardo relied on to make his case for release — even those referred to during his hearing. The parole board maintains inmate’ privacy trumps disclosure. A Federal Court decision on the case has been under reserve since February.