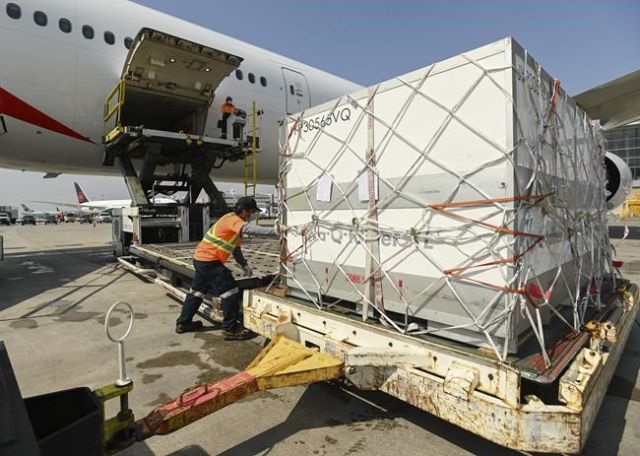 Photo: The Canadian Press
Airport ground crew offload a plane carrying just under 300,000 doses of the single-shot Johnson & Johnson COVID-19 vaccine during the pandemic in Toronto on Wednesday, April 28, 2021. More than 300,000 doses of the Johnson & Johnson single-shot vaccine will not be released for use in Canada. THE CANADIAN PRESS/Nathan Denette

More than 300,000 doses of the Johnson & Johnson single-shot COVID-19 vaccine will not be released for use in Canada.

The vaccines were quarantined in April before they were distributed to provinces because Health Canada was informed the drug substance in them was manufactured at the Emergent BioSolutions facility in Baltimore, Md., where there have been quality control issues.

J&J had to throw out more than 15 million doses of vaccine made at the plant in early April after it was discovered workers had mixed up the formula with one for the Oxford-AstraZeneca vaccine, which was also being made there.

Health Canada says the substance in the 310,000 Canadian doses was manufactured at the same time as those contaminated ones and it can't determine if they meet Canada's standards.

As a result, it will not be releasing them for use in Canada.

The department says it is planning an on-site inspection of the Maryland facility this summer but, until that is completed, Canada will not accept any product or ingredients made there.

"Canadians can be assured that any vaccines will only be released for distribution once Health Canada is satisfied that they meet the Department's high standards for quality, safety and efficacy," the department said in a statement late Friday.

Earlier Friday, Joelle Paquette, director general for Public Services and Procurement Canada, told a briefing that another unspecified number of J&J doses are expected to arrive by the end of the month. It was not immediately clear where the second batch is being manufactured or whether it will be affected by Health Canada's decision.

The U.S. Food and Drug Administration also announced Friday that some 60 million doses of the J&J vaccine from the Baltimore plant will have to be tossed.