'Failure is not an option' 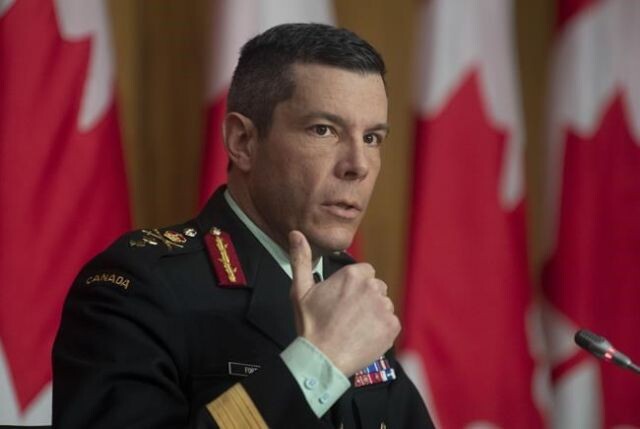 The sudden departure of the senior military officer in charge of Canada's vaccine rollout is unlikely to slow down the high-profile operation, an expert in military affairs said Saturday.

Christian Leuprecht, a professor at Queen's University in Kingston, Ont., said the unexpected reassignment Friday of Maj-Gen. Dany Fortin won't affect vaccine distribution because the military always has a second in command ready to get the job done.

"The mantra is, 'Failure is not an option,'" Leuprecht said in an interview Saturday.

"The mission has to go on. If you're fighting a war and your general gets taken out, you need someone who is able to step into the fray right away and keep running the operation. The entire machine is set up to keep on rolling."

Fortin's replacement was not revealed Friday and the Defence Department declined to comment on the case Saturday. The Public Health Agency of Canada did not respond to a request for comment.

In Manitoba, the province's deputy chief public health officer had little to say when asked about Fortin's abrupt exit.

"I haven't heard anything related to that," Dr. Jazz Atwal said Saturday during a news conference with provincial Education Minister Cliff Cullen.

The Department of National Defence has confirmed Fortin left his post with the Public Health Agency of Canada pending the results of a military investigation, though the nature of that probe was not revealed in a statement released Friday.

Defence Minister Harjit Sajjan issued a brief statement that night saying he was committed to building a culture of inclusion for the Canadian Armed Forces, and he also said he wants to make sure the military sheds "toxic and outdated values, practices and policies."

But the minister's statement did not provide any clarity regarding the reasons for Fortin's departure.

The Canadian military has faced increased scrutiny since February when allegations of sexual misconduct were levelled against the former chief of defence staff, retired general Jonathan Vance.

Military police are investigating allegations that Vance had a sexual relationship with an officer under his command and that he sent an off-colour email to a junior officer in 2012, before taking the military’s top job.

Vance has not responded to requests for comment from The Canadian Press, but Global News has reported he denies any wrongdoing. He stepped down as chief of the defence staff in January and has since retired from the military.

Meanwhile, Vance's replacement as chief of the defence staff, Admiral Art McDonald, stepped aside due to an unspecified allegation of misconduct. He, too, is facing a military police investigation.

Brian Greenspan, a lawyer for Edmundson, said Friday his client denies the allegations.

Leuprecht said the military is suspending people "to maintain the integrity and the legitimacy of both the institution and the chain of command."

"Given how pervasive the problem appears to be, the approach they've had to implement ... is effectively to remove people with pay until such time as the matter has been fully investigated."

Having served in the military for almost 30 years, Fortin commanded NATO's training mission in Iraq and led Canadian soldiers in Afghanistan at the height of the fiercest fighting there.

Last November, Fortin was appointed by Prime Minister Justin Trudeau to oversee what he called the "greatest mobilization effort Canada has seen since the Second World War."

The military has since managed a global supply chain for national vaccine distribution, and has also helped with provincial management of long-term care homes.

Fortin was appointed to serve as vice-president of operations and logistics for the for the Public Health Agency of Canada.

As Canada watched for further developments on the national immunization drive, COVID-19 infections continued to mount in some recent hot spots.

Ontario counted 2,584 new cases of COVID-19 on Saturday, coupled with 24 new deaths linked to the virus.

Nova Scotia, which has been the Atlantic province hardest hit by the pandemic in recent weeks, reported 86 new cases of COVID-19.

It's the first time the province's daily case count has dipped below 100 since May 1.

Meanwhile, Manitoba counted 430 new cases of COVID-19 and four added deaths, while Saskatchewan recorded 196 new cases of the virus and one death and Alberta identified 1,195 new cases and three deaths.