Alberta man gets life in prison for killing two children 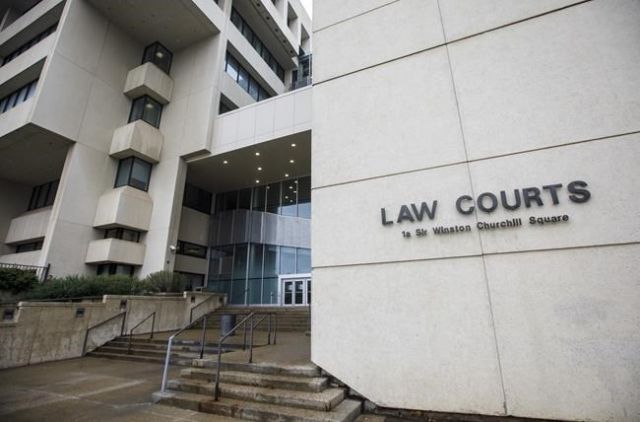 Photo: The Canadian Press
The Edmonton Law Courts Building is shown on Wednesday, July 8, 2020. A sentencing hearing continues today for a man who admitted to assaulting his girlfriend and killing her two young children.

A man who admitted to assaulting his girlfriend and killing her two daughters in "an act of extreme violence" has been sentenced to life in prison with no chance of parole for 17 years.

The 31-year-old man, who cannot be named to protect the identity of the children, pleaded guilty in Court of Queen's Bench last month to two counts of second-degree murder, aggravated assault and breach of probation.

One of the children was three and the other was just over six months old when they were stabbed to death and their mother assaulted at an Edmonton apartment in December 2018.

Henderson said the man's duty was to take care of the children, but he instead carried out a "senseless, brutal, vicious and inexplicable act of extreme violence that caused (their) deaths."

An agreed statement of facts entered into the court record in January said the mother and the boyfriend had been living together for about a month at the time of the attack.

It said they had both struggled with addictions, but that the mother had been sober for a time before the man moved into the home.

The statement said the mother asked the man to watch the girls while she met with a support worker.

GRAPHIC WARNING: The following details may disturb some readers.

"It was during this time, while (the mother) was away, that the accused killed (the girls)," it said. "The accused admits that he stabbed each of the girls multiple times, causing their deaths."

The man admitted to putting the children in separate black garbage bags, tying them up and putting them in a bedroom closet. He then used various items to cover up the bags, the statement said.

When the mother returned, she saw the man with blood on his face but couldn't see her daughters.

The statement said she demanded he tell her where they were and punched him. The accused then struck her with a large metal bar.

She told police he had an "evil look in his eyes" and was smiling when he attacked her. She felt that he was trying to kill her, said the statement.

The mother was able to run out of the apartment building, but the accused chased her outside.

"(She) fell to the ground. The accused approached her with the bar. (She) kicked the accused as he came close to her, causing him to drop the bar."

She then ran off toward a nearby building as the man yelled: "you win, you win."

Some witnesses found the woman and helped her until an ambulance arrived. When it did, the statement said paramedics had a difficult time getting her into the ambulance because she was worried about her children.

Officers couldn't find them in the apartment on an initial search. They did a second search later that night and located the bags in the closet. Both girls were declared dead at the scene, said the statement.

The man was arrested by police earlier that night when he was found naked in a nearby garage.

The statement said he was charged by police the next morning. Toxicology results showed he had high levels of methamphetamine in his system.

"The accused admits his level of intoxication from drugs at the time he killed (the girls) did not negate his intention to commit murder," it noted.

The man automatically gets the life sentence for murder, but the Crown and defence had put forward the joint recommendation on parole eligibility accepted by the judge after a two-day sentencing hearing.

Prosecutors had argued Thursday that the sentence must send a strong message because the case involves the death of two children and the brutal assault of an intimate partner.

Defence lawyer Gary Smith said in his submission there were other factors that should be considered.

"The fact that there was a guilty plea ... is a huge one," he said earlier Friday.

Smith also said there were issues related to his client's Indigenous background — including alcohol and drug abuse, as well as physical and sexual abuse — that must be considered by the court.

In addition to the life sentences for murder, the man received six years for the aggravated assault and one year for the breach of probation. The sentences are to be served concurrently.