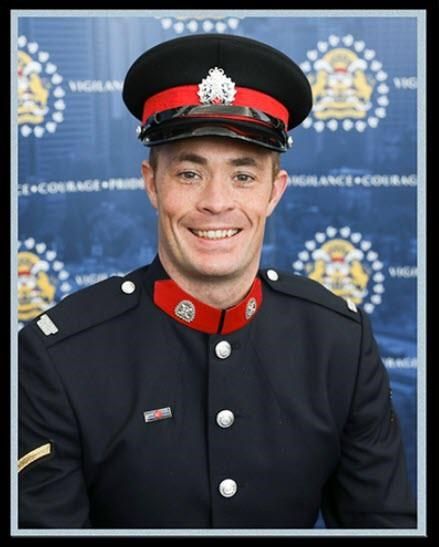 Photo: The Canadian Press
Sgt. Andrew Harnett, 37, of the Calgary Police Service is shown inthis undated handout image provided by the police service. A regimental funeral for a Calgary police officer killed in the line of duty is to be held this afternoon in the city and a procession following the funeral will include a flypast by two CF-18s.

A regimental funeral for a Calgary police officer killed in the line of duty is to be held this afternoon in the city and a procession following the service is to include a flypast by two CF-18s.

Officials say that due to COVID-19 restrictions only people who have been invited can attend the 1 p.m. service to honour Sgt. Andrew Harnett.

The Calgary Police Service has been granted an exemption from Alberta Health to allow 50 people to take part in the ceremony.

The service says it comes with a set of strict protocols and stringent oversight by health officials.

Harnett died on New Year's Eve after he was struck by a vehicle during a traffic stop, and two people have been charged with first-degree murder in his death.

The 37-year-old leaves behind his wife, Chelsea, who is to give birth to their first child in the summer.

Police say the funeral will not be shared publicly at the request of the family, but the procession will be live-streamed.

Two Royal Canadian Air Force CF-18 Hornets from 410 Squadron at 4 Wing Cold Lake, Alta., are to conduct the flypast of the memorial service at about 3 p.m.

Police say it will take place over the police headquarters building in northeast Calgary.

The flypast is to pay respect to Sgt. Harnett and honour his service and sacrifice in protecting Canadians and citizens of Calgary, both as a member of the Calgary police and a former member of the military police in the Canadian Armed Forces.