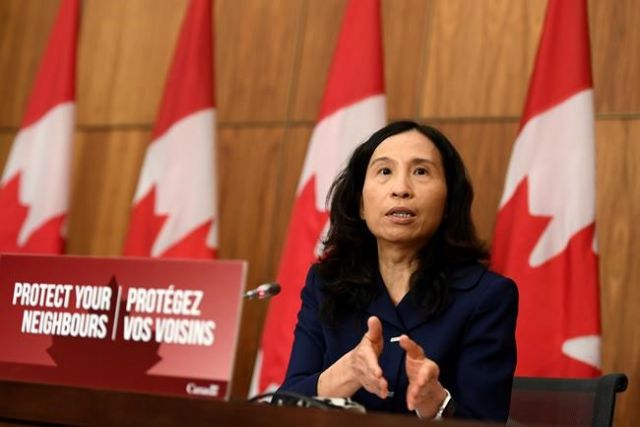 Photo: The Canadian Press
Chief Public Health Officer of Canada Dr. Theresa Tam speaks during a news conference on the COVID-19 pandemic in Ottawa, on Friday.

Canada's top doctor says the country is still on a troubling track for new COVID-19 infections as case counts continue mounting in much of the country.

Chief Medical Health Officer Dr. Theresa Tam says the most recent infection rates are keeping the country on track to hit as many as 10,000 new cases a day by mid-December.

Tam says Canada is currently recording caseloads at about half that level, with the most recent seven-day average standing at 5,335 between Nov. 20 and Nov. 26.

Tam says Canada is also averaging 76 deaths a day and more than 2,100 people in hospital.

Her assessment comes as case counts continued to soar in numerous provinces.

Ontario, meanwhile, logged case numbers just shy of Friday's one-day record as it reported 1,822 new diagnoses in the past 24 hours.

Among those who died was a boy under the age of 10, officials said, though they offered no other details.

"If we continue on the current pace, our longer range models continue to forecast significant increases in daily case counts and estimate that there could be up to 10,000 cases reported daily by mid-December," Tam said in a statement. "Right now, we have a window of opportunity to act collectively together with public health authorities to bring the infection rate down to a safer trajectory."

Tam redoubled her calls for Canadians to heed public health advice, limit their social interactions and practice physical distancing in a bid to bring surging case counts under control.