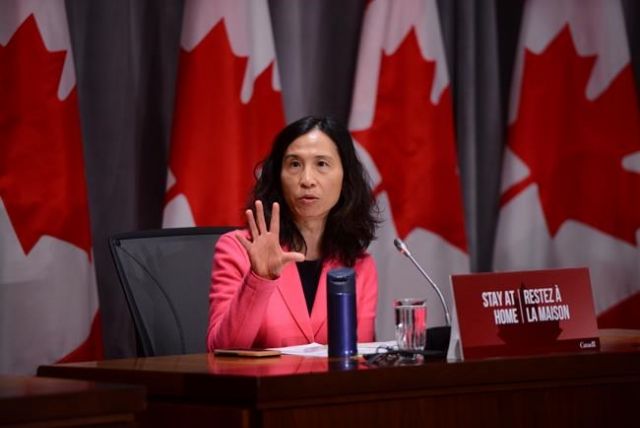 Photo: The Canadian Press
Dr. Theresa Tam, Canada's Chief Public Health Officer, speaks during a press conference on Parliament Hill during the COVID-19 pandemic in Ottawa on Wednesday, May 6, 2020. Tam says a COVID-19 outbreak gripping the northern Saskatchewan community of La Loche is an area of concern.THE CANADIAN PRESS/Sean Kilpatrick

Dr. Theresa Tam says not only is the region remote, but it's home to Indigenous communities.

“People are taking it extremely seriously because these are more vulnerable situations," she said Wednesday during her daily briefing in Ottawa.

Health officials in Saskatchewan say the novel coronavirus arrived in the Dene village of La Loche, 600 kilometres northwest of Saskatoon, last month via travel from an oilsands work camp in northern Alberta.

It has since spread through the community, making it the region in the province with the most active cases and triggering a lockdown there on non-essential travel.

Two elders living in a long-term care facility in La Loche have died from complications related to COVID-19.

The nearby Clearwater River Dene Nation and the English River First Nation have also reported cases.

In recent days, the outbreak has been driving up the number of cases in the province, which surpassed 500 infections on Wednesday.

All but three of the newest 25 cases announced are from La Loche. In the far north region, there are 138 active cases.

Tam said there's a significant number of health workers going door to door to search out infections and there's capacity to do lab testing on site.

The Public Health Agency of Canada has also offered its support, she said.

Also on Wednesday, the Saskatchewan Health Authority reported a COVID-19 case in a second northern hospital. A worker at the Meadow Lake Hospital has tested positive. Earlier, the health authority reported an infected patient from La Loche had stayed at the Victoria Hospital in Prince Albert.

Perry Bellegarde, national chief of the Assembly of First Nations, has called the northern outbreak alarming. He said First Nations communities are more vulnerable because of overcrowded living conditions and a lack of hospital access.

Two weeks ago, Premier Scott Moe announced Saskatchewan had "flattened the curve" and would reopen some services and businesses.

La Loche has not been allowed to ease any restrictions under the first stage that started Monday. Moe said he remains confident in moving ahead with the plan in the rest of the province, where there hasn't been the same spike in infections.

At a news conference Wednesday, the premier said testing and contact tracing have been ramped up, so he expects the number of infections will keep rising.

He also said things have changed in the province since he set a target of doing more than 1,000 tests a day for COVID-19.

Moe had asked health officials to try to achieve that and then bump up testing to 1,500 daily by the end of last month. Government data shows numbers have consistently fallen short of both targets.

"The testing that needs to be done is being done," Moe said.

There has been a drop in demand for tests, he added, but it is increasing again as officials try to contain the outbreak in the north.

Moe said while he hasn't abandoned his earlier target, what has changed is how the virus is spreading. At the time he set the goal, the premier said the infection was being spread through large gatherings and travel, but now it's mostly transmitted through the north.

Like other provinces, Saskatchewan has said increased testing will be key to relaxing restrictions around COVID-19. It recently expanded its criteria to include mild symptoms like loss of taste or smell.

This report by The Canadian Press was first published May 6, 2020