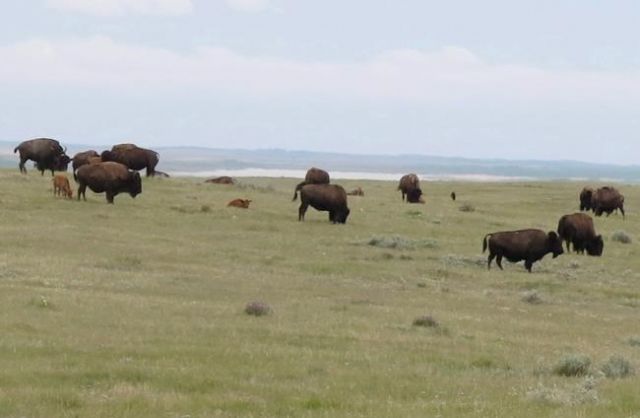 Research into free-roaming plains bison in Saskatchewan's Prince Albert National Park says the herd could go extinct from overhunting in fields outside the protected area.

The study, published in the journal Biological Conservation, looked at why the Sturgeon River herd's population has decreased to about 120 animals.

"We had about 500 bison back in 2005 and the population has been going down ever since, pretty much crashing," co-author Ricardo Simon said in an interview. "It's not usual for a species like bison, which is a big, large herbivore, to have a decrease in population size that fast."

Simon, a PhD student at Laval University in Quebec, said he and his supervisor Daniel Fortin looked at three potential causes: predation by wolves, diseases and hunting.

"My results show ... without a shadow of a doubt, it's the hunting by First Nations that's the real problem here. It's just not sustainable," said Simon.

The executive director of the Canadian Parks and Wilderness Society said it's an unusual situation.

"The Sturgeon River bison herd is unique in the sense it still has ... this traditional historic relationship with Indigenous people. That's something that doesn't exist in other (plains) bison populations," said Gord Vaadeland.

Indigenous people have a constitutional right to hunt bison and a spiritual connection with the animals that goes back generations. Since 2014, several First Nations have signed a treaty that's working to bring back bison on reserves and other co-managed lands in the United States and Canada.

"I know that it is Indigenous, First Nation harvesters that are contributing to the dangerous level that the herd is at," he said.

The First Nation will work with landowners, municipalities, wildlife groups and other Indigenous groups to better protect the herd, Johnston said.

"A big part of that is education. Some people know that the herd has been there for a number of decades and some, I know, believe the herd is healthy. They are not aware of the danger that they are in."

He said his people will work to "share the sad news" and to encourage other First Nations to sign the Buffalo Treaty.

Simon found that the crux of the problem is the number of bison being taken each year by a handful of individuals in a few agricultural fields bordering the park's western edge.

"Bison come out of the park and they go and feed in agricultural fields. They are attracted by the crops," he said. "In some of these fields, they are causing a lot of damage. The landowners get annoyed, understandably. They would call the First Nations guys and say, 'There's bison on my land. Can you come and get them out of here?'

"The combination is deadly."