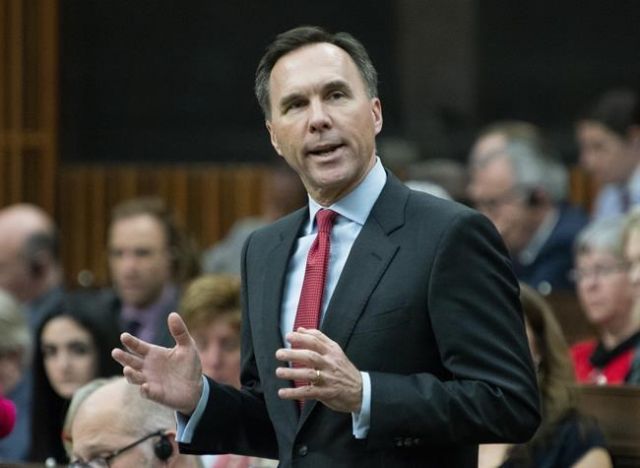 The federal Liberals have been facing criticism from some political foes and business leaders over Canada's regulations, including those blamed for holding back the construction of oil pipelines out of Alberta.

With the federal election six months away, there's intense political debate about Canadian regulations as parties, especially the Liberals and Conservatives, fight over which of them one is best suited to deliver on energy projects.

Morneau insists work is already underway on the LNG Canada mega-project in British Columbia because efforts were made to listen to people opposed to the venture as well as those advancing it.

"Canada can get big things done, but we have to do it by working together," he said in an interview. "The necessity is that we go through this process, that we do it in the right way. And that's clearly different than has been the approach in the past."

But shortly after LNG Canada's approval in October the federal Conservatives, who had been in office until 2015, insisted they deserved credit for getting the project finalized.

At the time, Tory MP Shannon Stubbs said in a statement the Harper government helped LNG Canada through the approvals process. She said Prime Minister Justin Trudeau "showed up for the final photo-op" and tried to take credit for it.

The head of LNG Canada says the Trudeau and Harper governments both gave boosts for the project, which will build an export terminal in Kitimat, B.C., and is on track for completion by late-2023.

Andy Calitz said in an interview this week that the project, which went through approvals between 2012 and 2018, received support from governments of different stripes over that period — in both Ottawa and B.C.

The country treated LNG Canada "extremely well" and the permits were delivered by the regulators on time, he said.

"So, in that sense Canada has treated LNG Canada well or alternatively we did our work thoroughly — or both. I'm not sure," Calitz said when asked about concerns over regulations and other obstacles faced by large projects.

"At the same time, I am today concerned about the interprovincial strife between Alberta and B.C. and the constant regulation challenges to pipelines being built."

He added it makes foreign investors, who are part of his project's consortium, vigilant about Canada.